No Backing Down From Reparation Calls – Minister Henry

Minister without Portfolio in the Office of the Prime Minister, Hon. Mike Henry (right), is presented with a framed photograpgh by Jamaica Information Service (JIS) Special Projects Manager, Andrine Davidson, capturing the moment he received the Order of Jamaica (OJ) at King's House last month. Occasion was the JIS's Annual Heritage Competition Awards Ceremony on Monday (November 25) at the Mona Visitors’ Lodge in St. Andrew. Minister Henry was the guest speaker at the event.

Minister without Portfolio in the Office of the Prime Minister, Hon. Mike Henry, says Jamaica will not back down from its push for reparation for the descendants of enslaved Africans. 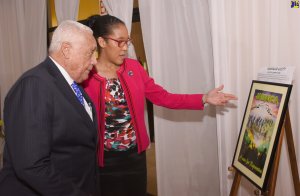 Minister without Portfolio in the Office of the Prime Minister, Hon. Mike Henry (left) and Chief Executive Officer of the Jamaica Information Service (JIS), Donna-Marie Rowe, look at one of the entries in the photography segment of the JIS Heritage Competition, at the awards ceremony on Monday (November 25), at the Mona Visitors’ Lodge, St. Andrew.

He noted that while the smatterings of compensation from a few organisations is a good place to start, and the country is encouraged by the show of support, a piecemeal approach is not the best way for Jamaica to attain full and satisfactory payment for slavery and its effects.

“There will be no moving on as though nothing happened. We are not listening to that kind of talk. The world knows what happened to our people during slavery because it is well documented,” he said.

Stating that slavery was the greatest crime against humanity, Minister Henry said that “our call for compensation is serious business. The wrongs of slavery cannot be made right by anything less than a robust country-to-country response.

“Small, individual settlements from the few enlightened do not remove or lessen the obligation of former mother countries to nations that were their colonies,” he added.

Minister Henry said Jamaica wants acceptance of the moral wrongness of the system of slavery; acknowledgment of the harm that was caused; recognition of the continuing impact on lives today; confession of the immense benefit gained by European countries and, of course, full and final monetary compensation to Jamaica.

“Nothing less will clear the debt,” he stressed.

He said that slavery did not just cause physical and emotional harm, noting that it had more far-reaching effects. 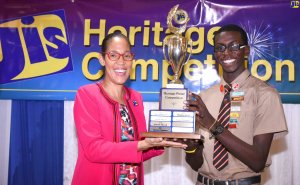 Chief Executive Officer of the Jamaica Information Service (JIS), Donna- Marie Rowe (left), presents a trophy to Cornwall College student, Curtis Clennon, who was the winner of the poster category of the JIS Hertiage Competition. Occasion was the awards ceremony held on Monday (November 25) at Mona Visitors’ Lodge, St. Andrew.

“In fact, the psychological impact remains with us today and it will not go away with sweet talk, arrogant dismissiveness, nor delay tactics. We will not merely forgive and forget,” he said.

“The Europeans enriched themselves on the backs of slaves in the Caribbean and built their empires with wealth extracted from this region. Today, we struggle under the weight of underdevelopment and unrealised potential. Fulsome compensation will put us at a place to begin the process of repairing some of the damage that was done,” he contended

In the meanwhile, the Minister congratulated the participants in the JIS Heritage Competition Awards, which included essay, poster, and photograpy elements focused on the topic of reparation.

He encouraged the students to position themselves to continue the fight for compensation for slavery.

“I want to put the baton in capable, steady hands. It’s time for this generation… to get in position. Indeed, the run is far from over, but a win in this matter is certain. I plan to be at the finish line, and, who knows… I might just participate in the victory lap,” he said.

Steven Bernard of Somerton All-Age and Infant School in St. James won the essay segment of the competition, which targeted primary-level students aged nine to 12.