Largest Cruise Ship to Call in 2020

No Child Should Be Denied Education Due To Fees – PM 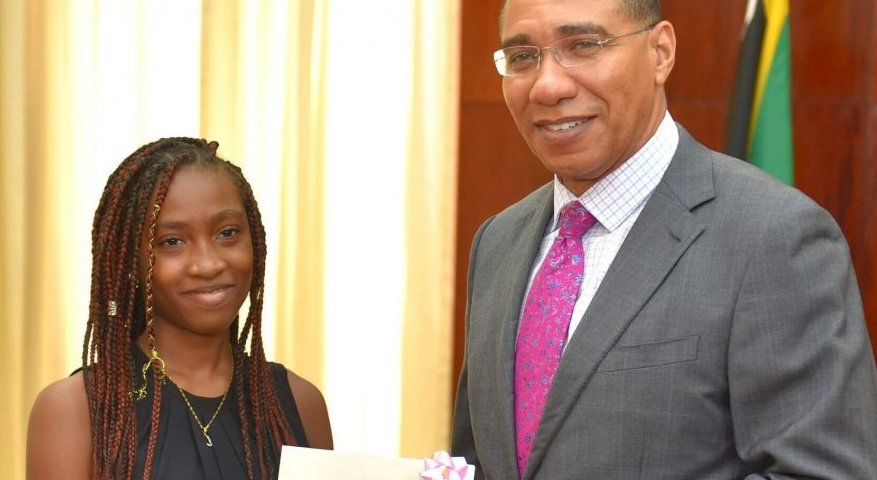 Prime Minister, the Most Hon. Andrew Holness (at podium), addresses attendees at a Primary Exit Profile (PEP) awards function at Jamaica House on Wednesday (Aug 14). Also pictured at the head table is Acting Chief Technical Director in the Office of the Prime Minister (OPM), Damian Cox. The awards ceremony recognised 15 children of OPM and Office of the Cabinet staff members, who were successful in their PEP exams this year. The Prime Minister presented them with book vouchers for back-to-school.

Prime Minister, the Most Hon. Andrew Holness, says no child should be denied access to an education due to obligatory prohibitive fees being charged by schools.

“I’m not saying that the parents must not contribute, but sometimes, we miss the bigger picture (which) is to make sure that no child, regardless of the income status of your household is in any way deprived of an education,” he said.

The Prime Minister was speaking at a Primary Exit Profile (PEP) awards function at Jamaica House on Wednesday (Aug. 14).

Mr. Holness said he is aware that primary schools have begun to charge fees which some parents are unable to afford.

“Whether it is ancillary or auxiliary, or registration – whatever fee it is, I am putting the primary schools on notice, that… I’m seeing an increased number of requests for assistance to pay for registration packages,” he said.

The Prime Minister stressed that at the primary level, the criteria for enrolment “should never be that the parent can afford it. The criterion for enrolment is your proximity to the school.”

He said that while he understands that principals are competing and are trying to improve their school, “it cannot be at the expense of having every child being enrolled with an equitable chance in a school.”

The Prime Minister noted that at the secondary level, the Government’s support to schools has increased dramatically since the introduction of the no tuition policy.

He noted that last year, the Government spent $34.1 billion on secondary education, which amounted to about $170,000 per child.

“We are not telling you that it is adequate, but…we’re now seeing universal secondary education, meaning every child can now get access to…a seven-year secondary (education). If you allow fees to become a consideration that will defeat the purpose,” he pointed out.

“The objective, as it was when we started Common Entrance… to when we changed over to the Grade Six Achievement Test (GSAT) to now having PEP, is to get all Jamaicans into the education system, with a fair chance of getting a solid education,” he emphasised.

The awards ceremony recognised 15 children of staff from the Office of the Prime Minister (OPM) and Office of the Cabinet, who were successful in their PEP exams this year.

During the event, the Prime Minister presented the students with book vouchers for back-to-school.