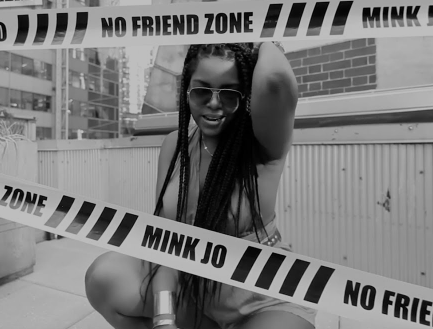 The Caribbean music’s newest hybrid- Mink JO officially released her music video for “No Friend Zone” featuring the dancehall prince; Konshens on Friday, August 19th through popular reggae site reggaeville.com. The ‘No Friend Zone’ track was released on April 20th 2015, and since then has made its way to the local and mainstream radio stations in the Caribbean (Such as popular radio stations fyah 105 fm and zip 103 fm continuously on loop) and abroad.

The’ No Friend Zone’ music video was shot in New York city and directed by Raised Fist Propaganda. The music video shows the star in and around different locations on a crime scene and shows the star in and around the state. It also shows behind the scenes of her entire radio promo tour and performances in New York. Mink gets to shows her ‘tomb boy’/raw dancehall side while giving her female flare/energy.

Since her debut release the upcoming singer has been doing many shows around Jamaica and has performed in New York City with Management mate- Sean Paul whilst recently doing her first ever official radio promo tour in the big apple (NYC) earlier this year.

The ‘No Friend Zone’ singer has also been working on collaborations with Mad Decent’s (Diplo’s record label) artistes; Brazabelle, & Bad Royale which is slated to be released later this year, with one of those tracks to be placed in a popular mainstream movie(To be announced soon). Mink also has many other major releases up her sleeve before 2016 comes to a close.
The singer is very elated that her “No Friend Zone” music video is finally coming out on her first ever official Vevo channel and hopes that the track lives on. “I’m just really happy that my hard work is being seen and i hope to continue with my progress.”
Mink JO- the first lady of the Brand New machine management group will not be one to be forgotten.