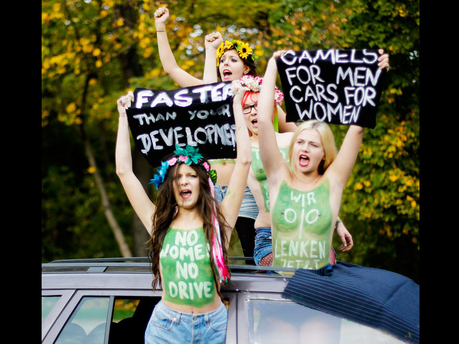 When the Natty Dread album was released in 1974, it marked a significant change for the most-renowned name ever in reggae. It was the first album credited to Bob Marley and The Wailers, instead of simply The Wailers (as had previous Island Records sets Catch a Fire and Burnin’). And the harmonies were sung by women (Marcia Griffiths, Judy Mowatt and Rita Marley) instead of men (Peter Tosh and Bunny Wailer).

Nearly 40 years later, women again figure prominently in No Woman, No Cry– but in another way. This time around the lyrics have been reworked by 26-year-old Saudi Arabian comedian Hisham Fageeh and his colleagues at the production house Telfaz11 in support of a campaign to permit women in the Middle Eastern country to drive motor vehicles.

The company specialises in creating comedies for online viewing.

The result is No Woman, No Drive and it has taken to the super fast lane of the information superhighway.

The satirical four-minute and 15-second YouTube video (a one minute and 37-second version was posted on the BBC website), garnered more than three million views less than two days after it was posted. In the process, it has become the most popular video in Saudi Arabia as well as other Arab countries, also generating much excitement in Denmark and Canada.

In the famed live version of No Woman, No Cry which appears on the Livealbum, Marley sings:

I remember when we used to sit

As they would mingle with the good people we meet

In this great future you can’t forget your past

So dry your tears I say

However, lead singer Fageeh offers a different spin in his a capella rendition,No Woman No Drive. Sporting wide-rimmed glasses while wearing a red checkered keffiyeh and white robes. Fageeh begins by clapping, singing and whistling to comic effect, then sings:

Say I remember, when you used to sit

In the family car but backseat,

Ova-ovaries all safe and well,

So you can make lots and lots of babies

In this bright future you can’t forget your past

So put your car keys away”

However, while No Woman, No Drive has been zipping around the Internet, up to yesterday afternoon it had not reached key members of the Marley organisation. Managing director of the Bob Marley Foundation and the Bob Marley Museum, Stephanie Marley, acknowledged that she was unaware of the video and, therefore, could not comment. However, she did note that it was necessary to protect the Bob Marley name.

“Definitely we want the song to stay to the integrity with which it was created,” she said.

And brand manager for the Marley Family, Courtney White, declined to comment when contacted by The Gleaner.

The parody was posted after Associated Press (AP) reported on Friday that the Saudi Arabian government was ratcheting up its warnings over plans for women to defy the ban by getting behind the steering wheel. There were no reports of arrests in this protest.

Saturday’s driving protest was planned by women who had earned their driver’s licence outside the country. AP reported that about 60 women participated.

Fageeh told BBC that “for two days my brain has been on fire – I can’t wrap my brain around what is happening”.

He said the idea “came to me either in the shower or in the toilet”. Despite the subject matter, Fageeh emphasised that he is not a political activist but a comedian. “My philosophy is that you do something you think is funny and hope that other people enjoy it. I’m not aiming to do anything political, just to entertain,” he told the BBC.

For the original report go to http://jamaica-gleaner.com/gleaner/20131029/ent/ent1.html