Gov’t Targeting Increased Use of Technology in Education 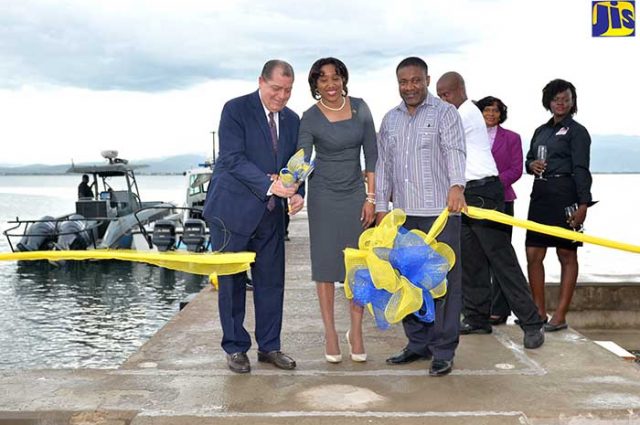 Minister of Finance and the Public Service, Hon. Audley Shaw (left), cuts the ribbon to officially commission a Jetty at the Port Royal Sufferance Wharf, run by the Jamaica Customs Agency (JCA), in Kingston today (August 30). With the Minister are Chief Executive Officer of the JCA and Commissioner of Customs, Velma Ricketts Walker (centre), and Member of Parliament for East Kingston and Port Royal, Phillip Paulwell.

Minister of Finance and the Public Service, Hon. Audley Shaw, says building of the North-South Highway has opened up business opportunities for Port Royal, and investors should seize the moment.

Mr. Shaw, who was delivering the keynote address at the commissioning of a Jetty at the Port Royal Sufferance Wharf, run by the Jamaica Customs Agency (JCA), on August 30, said “exciting times are ahead” for the area.

The Minister said a private-sector entity is now engaged in refurbishing the old Urban Development Corporation (UDC) building in downtown Kingston, with plans to create restaurants and other night-life features that will impact Port Royal and visitors coming from the “rich tourism area of Ocho Rios”.

Mr. Shaw told the audience that with consumer and business confidence at a peak, the time could not be better for the business community to make the best of the opportunities presented to them.

Meanwhile, the Minister urged Customs Officers not to make decisions that compromise the country’s security, as much of the illegal ammunition coming into Jamaica enters through the formal port system, and while the Government has made massive investment in technology to safeguard the ports, they have a role to make it work.

“The country is depending on you to discharge your duties with integrity and to secure the nation,” he said, adding that “when you make decisions, you are making decisions not only about protecting the revenue of the country but the lives of our citizens”.

Chief Executive Officer of the JCA and Commissioner of Customs, Velma Ricketts Walker, and Member of Parliament for East Kingston and Port Royal, Phillip Paulwell, welcomed the new facility, which has been constructed to enhance the surveillance capabilities at the wharf.