Dr. Peter Phillips Back In Parliament 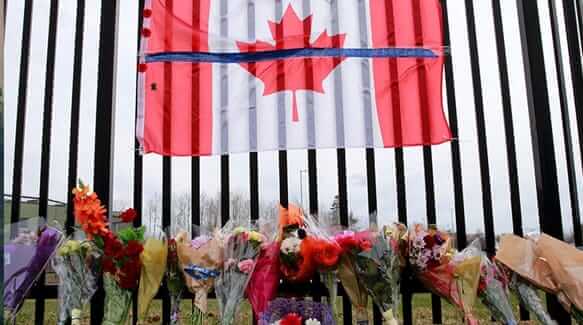 As the extent of the carnage is getting stale the quiet almost sleepy province, yet picturesque neighbourhoods of Nova Scotia are trying to make sense of this tragedy. Five dwellings were torched including vehicles. Some 16 different crime scenes spread over 90 kilometres. It is a nightmare just trying to understand this patchwork of madness, just putting it together alone. The police said we should expect possibly more deaths. They have proven right. The death toll in NS from the massacre is now up from 18 to 22. Is this the end of the road for deaths? We hope so. The capital of the province is Halifax.

Even as there is social distancing as a result of the COVID 19 pandemic, a memorial service is set for Friday 24, April in Nova Scotia. People want to grieve despite the C19 pandemic … this is the reality. People feel compelled to grieve and should be allowed to do so safely.

We now known more of the victims. For example it has emerged that the married nurse killed in the rampage whose partner’s name is Nick, was pregnant. Also the teacher Lisa who taught a grade 3 class, was a single mom with two male children that she was raising on her own. A Family lost three if it’s members as the dust is beginning to settle and the full extent of the individual tragedies emerge. The scale of the human suffering may never be fully known. In this area people reach out to each other and know each other. They are a close nit community.

Ms. Heidi Stevenson is a 23 year veteran of the force who was senselessly killed was remembered by colleagues and echoed by PM Justin Trudeau as a very professional officer. She leaves behind two children, and others to mourn her loss.

Larry Harrison, a former clergyman of 41 years, now a Member of the Legislative Assembly (MLA) for 8 years, said inter alia ” I remember Lisa the grade 3/4 teacher who was raising her two children son 10 and 12 on her own”. She was also gunned down as if a target practice exercise gone wrong. Asked if alerts from the RCMP in the form of tweets, the MLA said he is not focussing on that right now. He was speaking to Rosemarie Burton of CBC News.

It has been revealed that the gunman now killed by police had minor run ins with the law and had a fixation on being a Royal Canadian Mounted Police (RCMP) officer aka the Mounties. He donned a uniform that bore a close resemblance even with decals on the shoulders similar to the real type worn by the RCMP, his car was decorated to resemble a RCMP patrol fleet vehicle. It would have been very difficult to detect this suspect. This could explain why he went about undetected for twenty four hours or so. The duration of his rampage across North and South N.S. , Canada with a population of 972, 000 persons.

The ongoing investigation is likely to take months due to wide area of the crime scene and the need to preserve the integrity of each 16 crime spot.

It was also revealed that some 5 blazes believed to be connected to this rampage has to be meticulously sifted to ensure there are no chared bodies or remains amongst the burnt out timbers. If more than one victim was in say a home … experts like an anthropologist need to be deployed to differentiate bones say found in fires suspected to be a crime scenes. We are not clear if the rise in death tool to 22 includes remains so found.

It is our further perspective that urgent gun control is a viable solution to proliferation of guns. Especially high powered weapons. PM Justin Trudeau answering questions at his daily news conference on COVID 19 pandemic addressed the issue of gun control. He reaffirmed his commitment to enacting legislation to address same. “We were at an advanced stage with Legislation to restrict assault rifle ban (ARB) was ready before Parliament recessed.” declared a stone faced PM with grief visibly written over his face. “We are in solidarity with Nova Scotians.” The PM reassured the nation.

We support an Assault Rifle Ban as long as hunters can be exempted. Greater background checks must be done and criminal past must be examined closely before a permit is granted. This our perspective. What do you think?