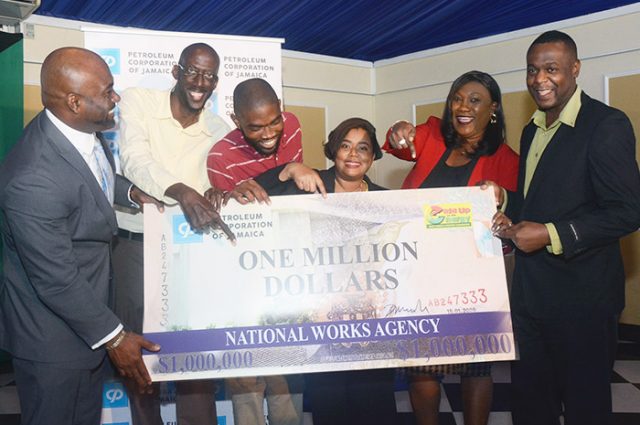 The National Works Agency (NWA) are winners of the Petroleum Corporation of Jamaica’s (PCJ) Government of Jamaica Energy Champion Competition.

During the event, competing entities had to show a reduction in their energy consumption between September and December 2017 compared to the corresponding period in 2016.

The NWA recorded a 20 per cent reduction in their energy costs over the period, which translated in savings of $1.6 million. For their effort, the Agency won $1 million dollars’ worth of energy saving equipment.

Property and Estate Manager at the NWA, Khalid Peart, tells JIS News that in preparing for the competition, a walk-through audit was undertaken by the Electrical Mechanical Supervisor, who identified the energy consumption and cost.

Mr. Peart says from that initial step, an energy management committee within the Agency was created.

This committee, he says included members from the Accounting, Procurement, Information and Technology and Property and Estate Management Departments.

He notes that the committee then created new and innovative ways to get across the message of energy savings to staff members.

“A number of social initiatives were implemented to change the culture of the staff,” he informs.

Some of the measures included, maintaining the temperature of the air conditioning (AC) unit at a range that is comfortable, but not at a level that would increase the energy consumption.

Additionally, employees were encouraged to turn off their AC unit or computer if they were going to be out of the office for more than an hour.

Mr. Peart says that the staff were on board with the measures, adding that “it sparked a lot of discussion.”

“We had to explain how this change in behaviour would actually affect the utilities, which enhanced the buy-in that we got from them,” he shares.

Additionally, he says that the initiative sparked questions on how this could be applicable within their homes as well, “so that they could take some of these practices home to see a personal benefit.”

To assist with this, Mr. Peart says that the Agency undertook some information sessions highlighting “what to look for on a particular product when you are buying it, to see how energy efficient it is, so that they can see some savings on their light bill.”

He states that persuasion and reinforcement of the messages were key to keeping the staff on track and getting more buy-in, adding that some of the tools used to promote the conservation included the intranet, posters and short phone messages.

“For example, we had a timely message that was sent out during lunch hour to turn off AC units when leaving the office for lunch,” he shares.

Meanwhile, Mr. Peart says the competition allowed the Agency to create a culture of energy conservation and efficiency.

The Property and Estate Manager notes that prior to the competition, the NWA had an energy conservation programme, converting the fluorescent tubes to light-emitting diode (LED) tubes.

He says other measures implemented by the Agency included using LED flood- lights for external lighting and replacing older refrigerator units with inverter-types.

Additionally, the Agency installed a foam cool-roof system on a section of the building to reduce the heat load; tinted a number of windows and installed motion sensors in some of the bathrooms, and common areas.

Window locks and door seeps were also replaced to reduce the amount of cool air leaving the building.

Following the end of the competition, Mr. Peart says that “energy conservation and efficiency is now a culture within the organisation, so it is something that we expect to stay with us for years to come.”

Additionally, he says that the Energy Savings Committee will remain in place, even though the competition has ended.

The PCJ Energy Champion competition was part of the Government’s thrust to get public sector agencies and employees to become more efficient in their use of energy.