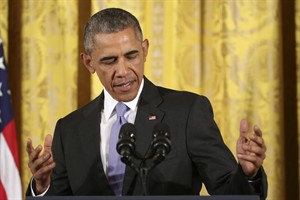 WASHINGTON _ President Barack Obama said people who attack Jews who support the Iran nuclear deal are like African-Americans who differ with him on policy and then conclude he’s “not black enough.”

Obama, in an interview with the Jewish newspaper “Forward,” was asked whether it hurt him personally when people say he’s anti-Semitic.

“Oh, of course,” Obama said. “And there’s not a smidgeon of evidence for it, other than the fact that there have been times when I’ve disagreed with a particular Israeli government’s position on a particular issue.”

The president added, though, that he’s “probably more offended when I hear members of my administration who themselves are Jewish being attacked. You saw this historically sometimes in the African-American community, where there’s a difference on policy and somebody starts talking about, ‘Well, you’re not black enough,’ or ‘You’re selling out.’ And that, I think, is always a dangerous place to go.”

Obama didn’t mention any specific critics or targets by name.

Asked to whom the president was referring, White House Press Secretary Josh Earnest on Monday mentioned former Arkansas Gov. Mike Huckabee’s charge that the nuclear deal was like “marching the Israelis to the door of the oven,” a reference to the Holocaust. Earnest added: “It’s certainly not the only example of the kind of political rhetoric that certainly the president and others find objectionable.”

Obama’s Treasury Secretary Jacob Lew, who is Jewish, was heckled this summer at a Jewish-themed conference in New York when he defended the nuclear deal and spoke of the administration’s support for Israel. Dan Shapiro, the U.S. ambassador to Israel, has received “threatening letters related to the Iran deal,” according to a U.S. official, who was not authorized to discuss the issue and spoke only on condition of anonymity.

Obama, in the “Forward” interview, said that while those who care about Israel have an obligation to be honest about what they think, “you don’t win the debate by suggesting that the other person has bad motives. That’s, I think, not just consistent with fair play; I think it’s consistent with the best of the Jewish tradition.”

On a lighter note, Obama was asked about his bagel of choice.

He described himself as “always a big poppy seed guy.” As for toppings, he added: “lox and capers OK, but generally just your basic schmear,” referring to a smear of cream cheese.

The interview was conducted Friday, and released Monday.