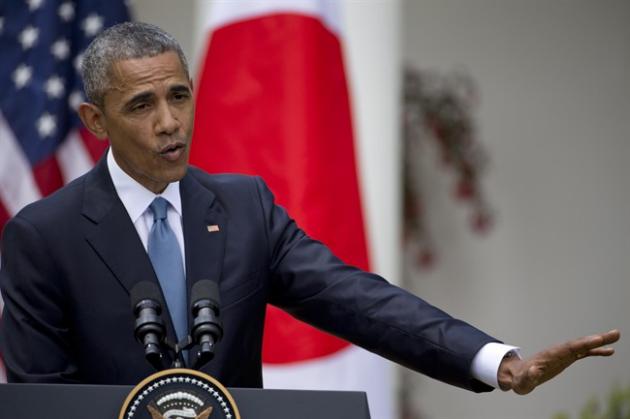 WASHINGTON _ President Barack Obama expressed deep frustration Tuesday over recurring black deaths at the hands of police, rioters responding with senseless violence and a society that will only “feign concern” without addressing the root causes.

A day after rioting erupted following the funeral for Freddie Gray, who died of a spinal cord injury after being arrested, Obama urged Americans to “do some soul-searching,”

“This is not new. It’s been going on for decades,” Obama said from the White House, just 40 miles (65 kilometres) to the south of where the rioting was taking place in Baltimore.

Gray is the latest black man to die at the hands of police, prompting protests and calls for criminal justice reform. Some have criticized America’s first black president for not speaking out forcefully enough as he tries to avoid criticism of law enforcement, and he responded by calling the deaths “a slow-rolling crisis.”

“We have seen too many instances of what appears to be police officers interacting with individuals, primarily African-American, often poor, in ways that raise troubling questions. It comes up, it seems like, once a week now,” Obama said. He said although such cases aren’t unprecedented, there’s new awareness as a result of cameras and social media. “We shouldn’t pretend that it’s new.”

Still, Obama showed no sympathy for rioters, saying those who stole from businesses and burned buildings and cars should be treated as criminals. Obama said they distracted from days of peaceful protests focused on legitimate concerns “over the possibility that our laws were not applied evenly in the case of Mr. Gray and that accountability needs to exist.”

“There’s no excuse for the kind of violence that we saw yesterday,” Obama said. “It is counterproductive. When individuals get crowbars and start prying open doors to loot, they’re not protesting, they’re not making a statement, they’re stealing.”

But he also criticized a society that doesn’t do enough to uplift poor minority communities. He said the solution to deep-seeded problems that spur violence include early education, criminal justice reform and job training, while suggesting that kind of a response is out of reach with a Republican Congress. “I’m under no illusion that out of this Congress we’re going to get massive investments in urban communities,” Obama said.

“It’s too easy to ignore those problems or to treat them just as a law-and-order issue as opposed to a broader social issue,” Obama said.

The president spoke during a state visit with Japanese Prime Minister Shinzo Abe, at one point apologizing to his guest for taking nearly 15 minutes of their news conference to discuss it. “I felt pretty strongly about it,” he said.

In an attempt to connect directly with Americans struggling with the issue, Obama taped an interview Tuesday with “The Steve Harvey Morning Show,” a radio show targeting primarily African-American audiences. The interview was to air Wednesday morning, the White House said.