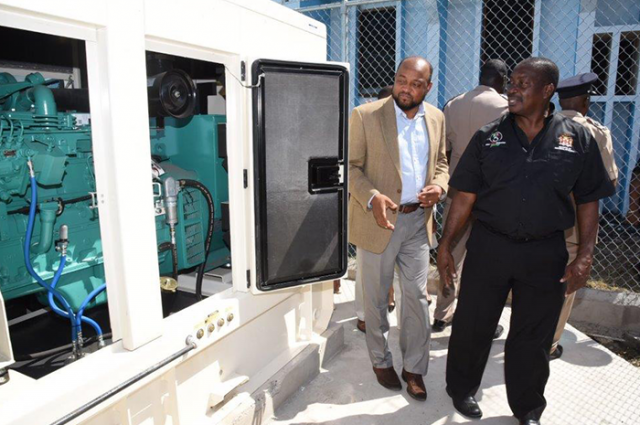 Minister of National Security, Hon. Robert Montague (right), and Mayor of St. Ann’s Bay, His Worship Michael Belnavis, look at the new standby generator installed at the Ocho Rios Police Station in St. Ann. The Minister officially handed over the equipment on August 31

The Ocho Rios police station now has a new standby generator, which will provide the facility with backup power when the grid goes down.

The cost of the generator, including installation, is approximately $7.3 million.

Minister of National Security, Hon. Robert Montague, who officially handed over the equipment on Thursday (Aug. 31), explained that the generator “has an automatic transfer switch so that as soon as light goes it switches on and switches everything on without anybody doing anything.”

“As soon as light comes back it instantly flips back over to the public grid. We have also provided a base where we have erected a fence around the generator. We have also done some electrical installation between the generator and the building, ensuring that everything is up and running,” he noted further.

Minister Montague said the standby generator is a“much-needed investment” and will enhance the operations of the police, which have been without such service for more than two and a half years.

“Because Ocho Rios produces so much for the economy of Jamaica, we cannot afford for the men and women, who are serving the citizens here to be without (electricity)  service at any time. This administration and this Minister take the welfare of our police officers very seriously,” he pointed out.

He noted that Ocho Rios is one of five towns in the country that has closed circuit television (CCTV) coverage and “we want to make sure that at all times the CCTV cameras are up.”

“We have a total of 37 cameras in Ocho Rios and they have been a great help to the police officers in detecting and preventing crime. Only recently, the cameras detected somebody trying to break into a car and the police was able to respond and prevent that,” he said.

Meanwhile, Minister Montague informed that police stations are to receive $250,000 for routine maintenance.

“It is to fix the bathroom, to fix the kitchen, to help with the electrical installation, to fix a window,” he noted.

“What we have done is to ask the head of every station to do a project and to involve the community and where that project has to be signed off by the consultative committee, which is chaired by the Custos. I am pleased to inform that every police station in St. Ann has submitted their project to do some type of work,” he said.

As it relates to the provision of protective equipment, he pointed out that 3, 500 ballistic vests have been procured and deployed.

“I remember about nearly two months ago when the police had a confrontation with the most wanted man in Westmoreland and where the life of one of our young constables was saved by the ballistic vest,” he informed.

The Minister also commended the Ocho Rios police for the quick action in apprehending escapees from the lock-up several weeks ago.