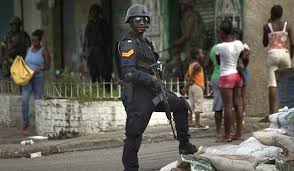 In a speech to Jamaica’s parliament, Peter Bunting said the 1,005 slayings recorded last year was Jamaica’s lowest annual total since 2003 and represents a 40 per cent reduction over the previous five years. Aggravated assaults went down by 17 per cent and rape by 23 per cent.

Bunting touted it as a “breakthrough year in the fight against crime.”

While credit for the decline goes to a number of factors, he partly attributed the success to changing the paradigm of policing in Jamaica. A community policing approach with officers working to develop trust in neighbourhoods is gradually starting to replace a paramilitary style of law enforcement that has dominated for 30 years.

He also praised the Jamaica Constabulary Force with a 54 per cent drop in police fatal shootings to give it the fewest deaths at the hands of law enforcement in years. The significant reduction _ from just over 100 last year compared to 258 slain in 2013 _ has drawn cautious praise from human rights activists.

Bunting attributed that big reduction to “greater attention to the appropriate use of force.” However, an increasingly robust independent agency that probes abuse allegations against security forces last year launched high-profile investigations against officers accused of murder, leading many to believe a new-found fear of prosecution was largely behind the drop in fatal shootings.

Jamaica’s overall success comes amid a trend of declining violent crime rates across the Caribbean. Puerto Rico had 681 homicides last year, the lowest number in nearly 15 years. Trinidad & Tobago saw a 27 per cent drop in killings from the 2008 high of 547. And there were fewer than 2,000 killings in each of the past two years in the Dominican Republic for the first time in more than a decade.

While violent crime is down in Jamaica, it’s still very high. The U.N. has listed the island as having the world’s sixth worst homicide rate and about a decade ago it had the highest.