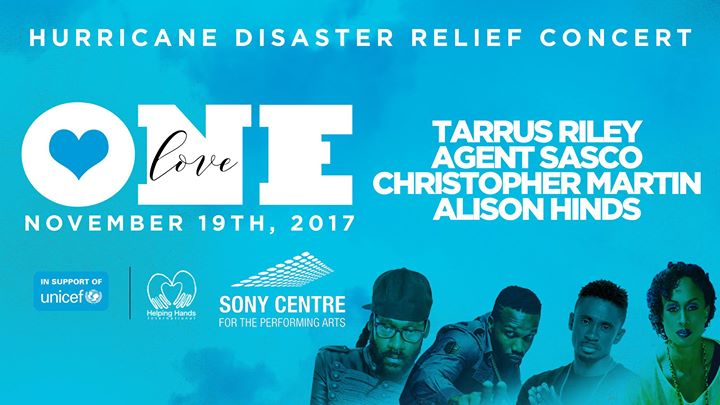 TORONTO, Nov. 17, 2017 /CNW/ – A concert to show “one love” for hurricane victims will be held at the Sony Centre; 7:00 pm on Sunday, November 19th 2017. One Love Concerts Toronto, in conjunction with UNICEF Canada and Helping Hands International, present the One Love Hurricane Disaster Relief Concert. The goal of the concert is to raise funds for victims of Hurricanes Irma and Maria.

A group of musical icons will use their influence and talents to showcase the amazing sounds of the Caribbean for a worthy cause. Performances will feature award winning artists: Tarrus Riley, Alison Hinds, Christopher Martin, Agent Sasco and more. The concert will be hosted by award winning comedian Jay Martin.

A tremendous amount of damage was caused by Hurricanes Irma and Maria; Barbuda is still uninhabitable, Dominica has areas without power, and many of the islands affected are still trying to pick up the pieces. The aim of the concert is to raise $1 million dollars and bring attention back to the affected islands.

The organizers of One Love Concerts Toronto want the people who are impacted by the hurricane, to know that they are not forgotten and that we still care. “When Hurricanes Irma and Maria ripped through the Caribbean Islands a few months ago, the damage was devastating. I saw the pictures and heard the stories of the survivors and my heart broke,” said Dwayne Hines, CEO of the Agency Groupe. “It’s been a few months and the coverage has died down, yet our brothers and sisters still need our help. We’ve put together an amazing show with award winning artists and comedians that will guarantee a great time for our audience, while raising money for a worthy cause.”

Part of the proceeds will go towards helping rebuild lives, restoring hope and reuniting the Caribbean islands that have been devastated by Hurricanes Irma and Maria.

The One Love Hurricane Disaster Relief Concert will be taking place at the Sony Centre for the Performing Arts, 1 Front St E, Toronto, Ontario, Canada.