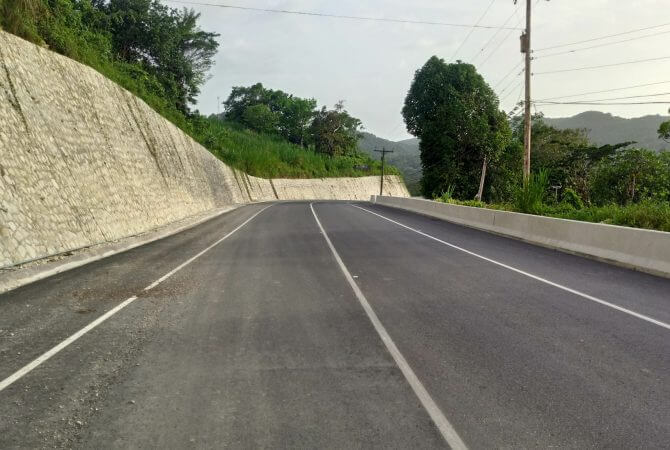 A section of the Ferris to Mackfield roadway in Westmoreland.

Community Relations Officer at the Western Office of the National Works Agency (NWA), Janel Ricketts, has informed that replacement of the Paradise Bridge in Westmoreland is in the final stages of completion.

In an interview with JIS News, Ms. Ricketts pointed out that the box culvert that forms the base of the bridge has been completed and “we are now allowing for a curing process which is required for 28 days before we can divert traffic onto that box culvert”.

“So, what we are doing in the interim is to complete other aspects of the work, such as the approach walls, side walls as well as the walls towards the box culvert,” she added.

Ms. Ricketts said following the completion of the curing process, which should end sometime this month, that section of the roadway will be reinstated and traffic from the nearby detour road, which is now in use, will be diverted to the new bridge.

The NWA closed the Paradise Bridge in October 2018, as that structure was compromised and, therefore, unsafe for vehicles to traverse.

The project is being done at a cost of $48 million.

Meanwhile, Ms. Ricketts told JIS News that the Ferris to Mackfield roadway has been completed. “All the major drains are in, so we are just in the final stages of tying up that contract,” she said.

Work on the 18-month project commenced in April 2018 and involved the repair of approximately 13 kilometres of roadway.

The project is being executed under the Major Infrastructure Development Programme (MIDP) and is being undertaken by China Harbour Engineering Company Limited (CHEC).