Mark Golding and PM Holness clash over the need for special powers.

The biggest thing is the “hypocrisy” to ask for increased police presence without more police powers.”

The Opposition has been blocking attempts to give the government increased powers. 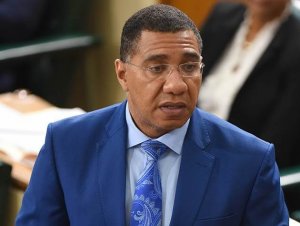 Prime Minister, the Most Hon. Andrew Holness, addresses the House of Representatives on March 31 2020.

Mark Golding objected to the comment made by PM Holness and refused to sit. Golding seemed to Holness’ reference about hypocrisy.

“Those opposed to increased police measures to stem crime are “hypocrites.”  I ask the Opposition to help us to quarantine the criminals .. you are doing the public a dis-service”

PM Holness speaking in Parliament was blasting the Opposition.

The speaker intervened, saying the eyes of the public are looking in on us. Yet Golding refused to sit or yield by stop speaking. MP Everald Warmington intervened by saying the Speaker has ruled. That intervention was without success.

The opposition Leader in a defiant tone, further firmly asserted while still on his feet … refusing to sit although ordered to do so by the Speaker:

“The court has ruled that the imposition of the State-Of-Emergency is unconstitutional. Until the court ruled otherwise we (the Opposition) has no other choice.  We await the results of the appeal.”

“To refer to those who opposed such measures as hypocrites, if not a Point Of Order, it is unparliamentary.”

The Holness government has appealed the court ruling that states that the indefinite detention of suspects is “unconstitutional”.

The clash in Parliament between Golding and Holness clearly shows that Opp Leader Mark Golding is no walk over. He obviously can be very firm.  This is the different side of the Opposition Leader not known by many. The perception by many is that he is soft.  This appears not to be so.

We will be following this debate. Stay tuned.

Hopeton O’Connor-Dennie us a veteran journalist who has International exposure.