PASTOR EXTRAORDINAIRE, DEDICATED HIS LIFE TO THE CHURCH

A distinguished and dedicated servant of God and Minister of the Jamaica Baptist Union, JBU the Rev Dr Roy James Henry has gone on to be with the Lord.  He died on Thursday March 17, 2022 at his daughter’s residence in Canada in the presence of his wife and family members.

Rev Dr Henry, who died at the age of 77, served in many capacities of the JBU, chief among them are Member of the Executive Committee for over 20 years, Chairman of the Ministerial Care Committee, Vice President, President and Superintendent Minister.  He distinguished himself as a father to many and a role model to both the young and the old in the Thompson Town Circuit of Baptist Churches in Clarendon and the East Queen Street Circuit of Baptist Churches in Kingston.  He extended his service to the people of Downtown, Kingston and dedicated (christened), baptized and married many in the wider community.  He has been a marriage officer and has performed over 1,500 of such ceremonies during his 42-year stint as a Minister of Religion.  Many knew him as a people person and Counsellor to all as one who restored peace in several communities in the business district of Kingston.

Many organizations had their anniversary services at the East Queen Street Baptist Church including annual National Assize Services. 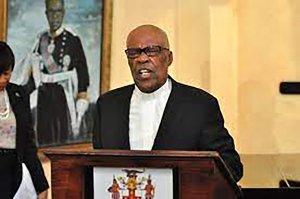 His service also extended to membership on the Boards of Vauxhall and Calabar High Schools, Board Chairman of Calabar Infant, Primary and Junior High Schools and of the National Religious Media Commission (Love 101FM).  He was also involved in the Outreach Ministry of the Jamaica Constabulary Force, Chaplaincy of the Joint Trade Union Congress and the National Chaplaincy of the Boys’ Brigade of Jamaica.

Many will remember Pastor Henry for his dynamic preaching, rap sessions with young people, love for children and counselling sessions and his infectious laughter.  He was instrumental in guiding the formation of the Dance Group, the 100-voice Circuit Evangelism Choir, a special children’s choir, among other groups in the Church.  Noteworthy was his strict adherence to time management and protocol issues of which the JBU relied on his expertise in these areas.  He was also an Adjunct lecturer in courses of the JBU and United Theological College of the West Indies.

Rev Henry studied at the Calabar Baptist Theological College, Jamaica, where he obtained the Licentiate in Theology, and a Master of Arts Degree and Doctor of Ministry from the Pittsburgh Theological Seminary, USA. Prior to ministerial training, he was a member of the Jamaica Constabulary Force for seven years.

In 1983, Dr Henry was named in the Who’s Who International Publication among students of American Universities and Colleges for being an Outstanding Student and also in 1985 in the Marquis Who’s Who.  In 2000, the Government of Jamaica awarded this committed man of God with the Order of Distinction, Commander (CD) for exceptional contribution to Religion and Community Development. 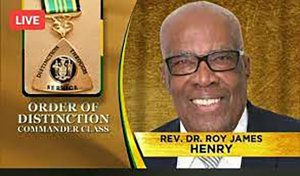 A true family man who would always be seen with his wife, Lorna and children.  Although there were great demands for the pastoral profession, Rev Dr Henry made sure to dedicate quality time to his wife and children.

He leaves behind widow Lorna who is a retired Senior Public Health Nurse and Nursing Educator at the University of Technology, UTech, Lorna, adult children Leighton, Rusheyne and Dale, daughters-in-law, son-in-law, grandchildren, 1 brother, relatives, a host of friends and the Baptist fraternity.

I had the privilege of meeting Rev Dr Henry at Minister’s Family Retreat of the JBU at its Conference Centre in Trelawny.  He was very hilarious with all the Minister’s children and we would look forward to seeing him at these sessions.  Since then, he has been a great role model to me and has become my second father and he accepted me as one of his children.  When I moved into Kingston to study at the College of Arts, Science and Technology now UTech, I transferred my membership from the Kitson Town Baptist to East Queen Street Baptist Church in 1991 when Rev Dr Henry became the Pastor.  I worked closely with him in launching the 100-voice Evangelism Choir; when he named me as Choir Director/Conductor, Youth Coordinator and on a Mission Trip to Oxon Hill, USA where 40 members of the Choir were engaged in Evangelistic work.  In 2004, I was appointed the Church’s first Administrator and again worked closely with my Pastor.   Having worked in the Media for over 30 years, Rev Dr Roy Henry always made himself available to members of the media fraternity to answer questions on Religion, Theology, Marriage and Family issues and Community Development

In summary, I would describe him as a great communicator, excellent administrator, dynamic preacher, great father to me (any many others), a genuine family man and a man of integrity where his “word was his bond.”

RIP my second father and may his passing be a transition to glory!!