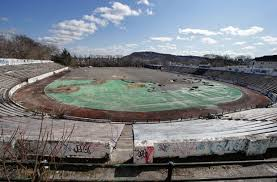 A dilapidated northern New Jersey stadium that once played host to legendary Negro Leagues baseball players and was recently named a national historic landmark is getting a boost for its restoration efforts.

The National Trust for Historic Preservation announced Friday that Paterson’s Hinchliffe Stadium will receive a $300,000 grant through a program sponsored by American Express.

The grant will be used to restore two original ticket booths at the 83-year-old stadium, which has fallen into disrepair since it closed in the late 1990s.

Hinchliffe Stadium opened in the 1930s and hosted teams including the New York Black Yankees and New York Cubans. Eleven members of the National Baseball Hall of Fame played there, including Larry Doby, the American League’s first black player.

Of 188 stadiums that were used by the Negro Leagues, Hinchliffe is one of a handful still standing, according to the NTHP. Among the others is Rickwood Field in Birmingham, Alabama, once home to future Hall of Famer Willie Mays.

American Express is the first corporate entity to support the stadium restoration and, it is hoped, will spur additional corporate involvement, said Brent Leggs of the Trust for Historic Preservation, which is spearheading the restoration effort.

An engineering and environmental assessment for a first phase of construction is about 90 per cent complete, Leggs said. That first phase would restore the horseshoe-shaped stadium’s middle section as well as its exterior walls; a second phase would renovate the playing field and lower stadium level and remediate areas contaminated with asbestos and lead paint, he added.

Leggs estimated the overall restoration of the stadium would cost about $32 million that would be paid for by public and private money.