A peace mural mounted on Downer Avenue in the Swallowfield community on Saturday (December 7), under the Ministry of National Security's ‘Liv Gud’ campaign.

The Ministry of National Security has partnered with the Edna Manley College of the Visual and Performing Arts to mount peace murals in the Swallowfield community in St. Andrew.

On Saturday (December 7), students from the institution painted pieces of artwork with words and images advocating peace, on walls on Downer Avenue and Old Henry Lane.

The murals are an element of community engagement associated with the Ministry’s ‘Liv Gud’ campaign.

Launched earlier this year, the campaign is a call to action for Jamaicans to take a stand against all forms of crime and violence. 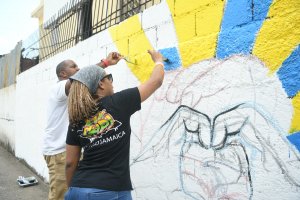 Spokesperson for ‘Liv Gud’ and Communication Consultant in the Ministry of National Security, Jackie Jackson (right), and Member of Parliament for South East St. Andrew, Julian Robinson, paint part of a mural on Old Henry Lane in Swallowfield, St. Andrew, on Saturday (December 7).

Minister of National Security, Hon. Dr. Horace Chang, said that the placement of peace murals in communities is aimed at fostering greater partnership with citizens.

“These murals act as a social contract between the community and the Ministry. Through these murals, the message of Liv Gud is being heard as we foster greater community engagement to strengthen public order, public safety and security,” he noted.

Spokesperson for Liv Gud and Communication Consultant in the Ministry, Jackie Jackson, said the mounting of the murals in Swallowfeld is aimed at promoting a culture of peace for the Yuletide season and beyond.

She noted that similar works of art will be mounted in 21 communities identified by the Ministry.

Member of Parliament for South East St. Andrew, Julian Robinson, who was present during the painting of the murals in Swallowfield, lauded the Ministry’s Liv Gud initiative.

“This was something we’ve always wanted in the community. When I attended the launch of the campaign a few months ago, I reached out to the Ministry and there was no hesitation to involve the Swallowfield community,” he said.

Senior Director of Crime Prevention and Community Safety at the Ministry, Renée Steele, for his part, said that through these works of art, “we want to obstruct negative environmental influences for both adults and children, promoting togetherness while reminding members of Swallowfield and neighbouring communities that the Ministry has issued a call to action to ‘Liv Gud’.”

The Liv Good campaign will include school tours, community rap sessions and other social-intervention programmes and competitions in 2020.

Football competitions were recently kicked off under the Citizen Security and Justice Programme (CSJP) III.

Approximately 80 teams from 20 communities have registered to participate.