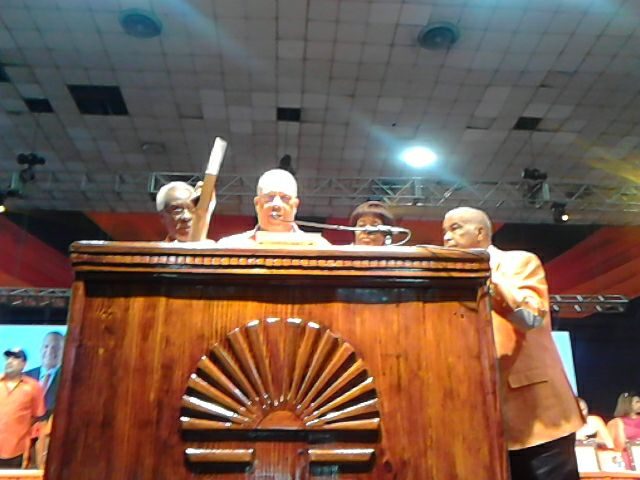 Photo: PJ Patterson left partially hidden by Bible as Dr. Peter Phillips takes the oath of office from PJ, as president of the PNP, Portia Simpson Miller looks on and party chairman Robert Pickersgill at right on complete the picture..jpeg

The Rise Of Dr. Peter Phillips to the presidency of the 78 year old PNP, has in my perspective,  been Dr. Peter Phillips’  life long dream.  He tried on at least two occasions to get there and failed. Once against Portia Simpson Miller and against PJ Patterson.   Dr. Phillips is an intellectual who has a passion for politics.
Dr. Peter Phillips has been a government minister under both leaders who defeated him for the leadership. He has never been up in the polls …. in other words popularity has never been his high point.

Dr. Phillips’  competence has never been in question.  What may be in question the means he may employ to achieve his aims. The electorate will have to judge him on his past deeds.  Integrity and trustworthiness are vital qualities for sound leadership.
We have little or no evidence to substantiate perception which could be considered credible enough to stand up to scrutiny in a court of law.  However, in public life perception appears to not very far from fact. It is no secret that Phillips has been the power and possibly brain behind the PNP under Portia Simpson Miller’s leadership of the PNP.  A form of Esaw and Jacob scenario … we all know this biblical story very well.  Phillips did well as finance minister in Portia’s last government.

Walk Out Of Parliament

The recent fiasco that saw the Opposition walk out of Parliament is a pretty good judge of the character of Dr. Peter Phillips the  considered defector leader of the People’s National Party (PNP).
We hope our perception of Dr. Peter David Phillips is wrong.

Dr. Phillips’ so called squatter initiative as mentioned in his speech yesterday at his swearing in as PNP leader will have to come good.   Of course that is when he gets back into power.  This may not be soon based on the performance of PM Andrew Holness as leader of the JLP.  Successive government have expressed a desire to house our people and provide land titles to the landless masses. This laudable plan is not new.  Many families have lived on land holding for up to 30 and more years and still have no title for same. To Portia’s credit she has tried hard in this area. Also JLP’s Bruce Golding and Andrew Holness himself.  This lack of titles for the landless in Jamaica is a relic of the post slavery era.  Since 1838 landless ex-slaves have struggled with this issue of no titles for land holdings and squatting has taken over.
Dr. Phillips is right when he mentioned this as one of his plans to help the masses to improve their lives.  We applaud this thinking as it is a great idea.   Will he achieve where others have failed to make a real dent?  Time will tell.
We hope Phillips will bear in mind when he is given the job of Opposition Leader and full power that “Power corrupts and absolute power corrupts absolutely”
We also hope he will honour his stated intention to respect our democratic traditions as he yearns for more power.  To do otherwise would be a serious betrayal of trust.
What is your perspective?  This is ours.  Let us hear from you.
Hopeton O’Connor-Dennie is SIC, Vision Newspaper.