The Anglican Church in Jamaica and the Cayman Island held another of the many Synods as is customary at the Holiday Inn, Montego Bay, Jamaica West Indies, April 18 to 21, 2017.

The Opening Church Service was held at the St. James Parish Church on Tuesday April 18, at 4 PM.  The Lord Bishop, as the head of the church in the Province is referred to as delivered his usual Charge, part one.  The Second part of his Charge is delivered in the private session to accredited Lay Representatives/delegates and clergy/church workers. Special invited guests, for example the Auditors and invited to the three days of private sessions.  In short it is a closed door affair … the undersigned was firmly advised that the proceedings was off limits to him ..although he is a communicant member of the Anglican Communion for over 50 years.  What did the bishops et al have to hide?\

Theme: The People Of God: Called To Transformational Mission
This Charge is intended to be like a Throne Speech delivered to the Nation by say the head of State.  The Anglican church was in the past years a State Church and the State and the Church were inseparable.  This seem to have changed some what due to declining membership within the church and changing times.  For reasons unclear this vestige of our Colonial past still exist as it relates to the Bishop’s Charge.  Time nor space do not allow for more time to be spent exploring this “strange” arrangement.
“At the recently concluded Clergy Conference we reflected around the Theme”Transforming the Diocese through Clergy Leadership, Stewardship, and Accountability … Possibilities to make a difference” In those very challenging sessions we learnt that transformational change is intentional and strategic and involves radical alterations in vision, culture, structure and values of a community or organisation among other things.”  Stated the Lord Bishop, Rt. Rev. Howard Gregory in his opening of his Charge – part one. ..quoted verbatim.
That was fine but it was when he went down the narrow political if not partisan road that eye brows were raised.
For example he went down the moral road.  Someone sitting beside me whispered that “If you live in a glass house you should not throw stones.”  To his (the Bishop’s) credit he bemoaned the recent sex scandals rocking the church community nationally.

He remarked to much fanfare that the government’s use of funds sitting idle in the Housing Trust to close the budget was tantamount to a “betrayal of trust.”
In my perspective the 14th bishop of the Diocese went too far.  Will he help to further reduce the membership in the Anglican church in Jamaica et al.?
We hope his comments will be ignored by the very partisan membership known to make up our Anglican churches.  It was disappointing to say the least that he chose to go down this road … well, it was his Charge and we did not pay for this Charge … as someone of the Church, who asked not to be identified … “we got his Charge at no charge”  I am still trying to understand this utterance.  I probably will understand some day.  After all, I do not have a PHD as yet.
It is my further perspective that the Bishop should heal his church before trying to heal the nation.  The Anglican Church is still respected by many but has lost it’s national appeal some what.  This is our perspective. What is yours. We will deal more deeply in the Bishop’s Charge in subsequent perspectives … this is our Part One. Let us hear from you, especially if you disagree.
Hopeton O’Connor-Dennie is SIC for Vision Newspaper. 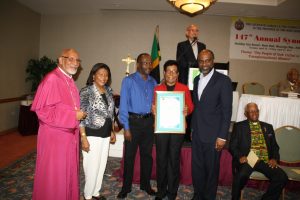 Mrs. Laceta Morlese Brown was honoured for over 50 years of service to the Anglican Diocese in Jamaica and the Cayman Islands at the 147 Synod, Montego Bay, April 18-21, 2017.  She replies (in red top) to the glowing tributes and Citation presented to her.  She gave an historical lesson to us all.