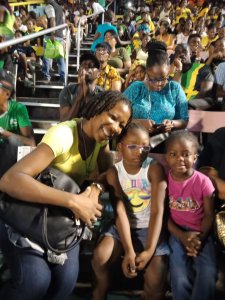 Crowd in background with Lisa O’Connor-Dennie and her daughters in the fireground.
Eliana 6 and Azania 4 cuddled in her arms. They were enjoying 2019 Grand Gala August 6. 2019 at the National Stadium, Kingston Jamaica W.I.

Minister Olivia “Babsy” Grange who has the culture portfolio for the government has to feel proud of what unfolded this year. It is a very complex operation rammed into one afternoon. Thousands of volunteers are required to participate and make the event a success. Some groups have up to a (100) hundred dancers etc

The Jamaica Cultural Development Commission (JCDC) is the state entity that coordinates all these cultural activities. The annual festival Queen and Festival Song competitions are among there responsibilities.

There was a massive outpouring of love and support for this year’s celebration of our public display at the National Stadium. Thousands estimated at 40, 000 jammed the Independence Park, home of the National Stadium complex. This complex consist of the National Arena,
Swimming pools, football fields, net all courts to name a few sporting activities which are house there. It is a sprawling piece of land. 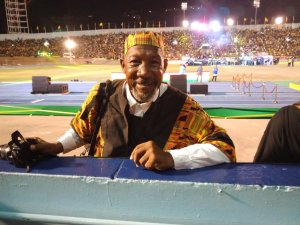 Dance, speech, gospel and performing artiste on stage also bike riding display. In a nutshell it is a cultural showcase on display of a varied nature.

This was an excellent display of rich culture.

Vision’s Hopeton O’Connor-Dennie decked out in his African dress at Grand Gala.  This outfit is made of genuine Kinty material which is usually hand woven in bright lasting threads.  There is matching hat to go along with the outfit.
Hopeton O’Connor-Dennie is an artiste in his own right having released a 17 volume poetic album entitled “Multiculturalism”…. produced in Ontario. Canada in 1995.  He has also performed locally and overseas on various stages.

Hopeton O’Connor-Dennie is SIC for Vision Newspaper Canada was there and filed this report.