Jamaica’s football fans can sigh a sense of relief tonight as there has been a settlement in the stand off between Jamaica Football Federation (JFF) President Michael Ricketts and Theodore Whitmore, head coach for the Reggae Boyz. The media was having a field day as the stand off made for exciting news, although it was sapping out the collective energies of the public. 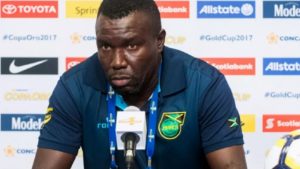 Whitmore had resigned, claiming he “is being disrespected”. It should be noted that there has been a protracted contract negotiations and the parties were far apart.  In fact, no settlement was in sight.  The only tangible result these talks seem to have produced is a letter of resignation from head coach Theodore Whitmore. There was an improved off being made to Whitmore but  he could not be found by President  RIcketts.  The president complained that Whitmore was not answering phone calls and failed to keep an appointed.  Ricketts also rejected Whitmore’s claim in his resignation letter “of  being disrespected”  Ricketts asked: Who disrespected him … certainly not me?  … we enjoy cordial relations … we cannot live above our means, so we cannot afford to pay anymore. The JFF is in deep debt.” Asserts the president. Continuing he said: This is a lean period for the JFF.” Ricketts was monitored by Vision’s SIC on a radio interview.

The details as to the amount of    money and other benefits which led to a settlement were not disclosed, and may never be, and possibly should not be.  This is a public office but all details may not be disclosed …. we will not be disappointed if these details are not disclosed. Our major concern is that there is a settlement. We are very happy at this new development.  The Minister can give the JFF a grant if she wishes.

The intervention by Sports Minister Grange is timely. This deal augers well for the future growth, stability and renewed” hope for development of football in Jamaica. Minister Grange’s mediating skills must be commended … football means a lot to the Jamaican public and to have had this head coach not on the bench and not in the football programme would be a big disappointment to all.

I told a friend that if anyone can strike a deal, Hon. Olivia ‘Babsy’ Grange will. She has that rare personality to settle disputes and bring combatants together. Former PM, Hon. Hugh Lawson Shearer had such a personality, quality and skill as well, he was  top class Trade Unionist. Former PM, Portia Simpson Miller can also be credited with such skills of settling disputes.  We pull no punches. We call it as we see it.

The JFF is believed to be J&24 million in debt.  They were using sponsorship donations to pay salaries.  Donations have been down in recent times. Previous overseas coaches were paid excessive salaries. Ricketts has vowed not repeat such mistakes.

In my perspective, the Boyz have not been winning games and even a friendly against Antigua  recently was drawn 1-1.  We have not been scoring goals. We have dropped too low in world ratings to get top class friendlies which pay good gate receipts … so our income is dangerously low.  We need to call a spade a spade. Congratulations to all. They say “All is well that ends well.