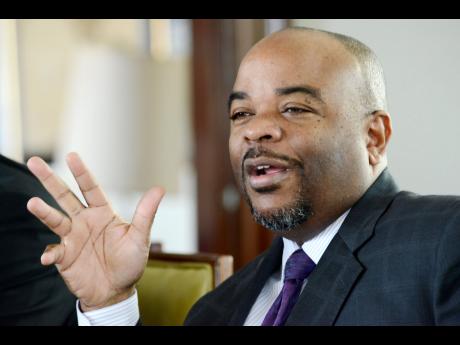 PM Holness pilots bill to extend State Of Emergency to May 2, 2018. The bill passed the lower house. It is up to the Senate to do likewise.

Under our Jamaican Constitution a State Of Emergency can only stay in force for 14 days.  It can be extended to a maximum of 90 days (three months) but must get Parliamentary approval by a vote of two thirds of the seats in both Houses … that is the lower House and the Senate. This vote was held Tuesday, January 30, and 51 members voted yes. There were 11 absentees. The speaker is the other vote not cast. This makes a total of 63. If the Opposition did not support the extension, it would be (DOA) dead on arrival, as they say in the streets. The motion for extension was adopted.

Speaking in Parliament Tuesday at the same sitting,  Opposition Leader Dr. Peter Phillips, M.P., rose to his feet and declared that “Policemen are being “disarmed” in public view by INDECOM.”  Responding, PM Holness said inter alia “the INDECOM Act needs to be reviewed as there needs to be balance. This review needs to be done sooner than later …. INDECOM was created by parliament and it is (us) this body, who will have to deal with it ” declared PM Holness to loud applause.

Commissioner of INDECOM Terrence Williams rejected this claim by Phillips. Williams said that claim is “false”. “It is the police who disarm their own, this is done at the police station” asserts a strident Williams. The INDECOM boss was speaking in a radio interview … INDECOM Officers are not so trained to “disarm” the police.  Declared Williams who was being asked to reject or confirm comments made in our parliament. Williams suggested that the parliamentarians inform INDECOM when it is “imbalanced and where it has gone too far.”

Political types are buckling under the pressure of certain individuals both internally and in the political arena. Is there mischief afoot to discredit INDECOM? The evidence seem to point in this direction.

Late 2017 Dr. Peter Phillips commenting on remarks made by Holness at his party conference in which he said “At times INDECOM went too far” Phillips blasted PM Holness for his apparent attack on INDECOM.  In fact he came to the defense of the Police watchdog body known as the Independent Commission On Investigations (INDECOM).

Any notion that INDECOM “should be less vigilant” is not acceptable, declared a strident Opposition Leader.

Is PM part of conspiracy to discredit INDECOM? We hope not as this would be unfortunate, to say the least.