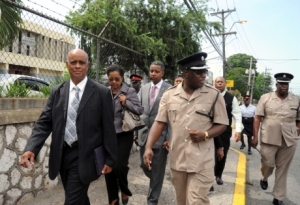 Photo: George Quallo, Police Commissioner-designate, in dark suit leads his colleagues on a foot patrol in the streets of Kingston, Jamaica, W.I.

There has been much discussion since the PSC did what it was mandated to do. That is to appoint a new Commissioner of Police to run the Jamaica Constabulary Force (JCF) which is celebrating 150 years of unbroken service to Jamaica.

Deputy Commissioner Novelette Grant, a female who was asked to act for 90 days was again bypassed for the top cop job.  There was natural disappointment on her part and on that of her feminist supporters and others.  The person selected  is not a gender thing … the process was not to please any feminist or other agenda.  This is a serious job for the person considered best suited to fill the post. This is how it is, and should be.
The crime situation in Jamaica demands a tough person with proven track record. one who can motivate the rank and file of the JCF to get the job done.

Let Us Look At The New Top Cop

Who is “Big George” as he is affectionately called by close friends and associates?
He is a 40 year veteran of the JCF and came through the ranks, starting as an ordinary beat cop.  This is a great achievement and should be a source of motivation to all in the police force.  Reports are that he is humble, hands on and is well respected. He is a convert to Community Policing and is regarded as the “Standard by which Area Commanders are judged”  according to MP Peter Bunting, former National Security Minister and Opposition Spokesman on National Security … as he reacted to the new top cop’s appointment.
We will say more about the new t cop later in vision …stay tuned.

To label the new appointee as having been politically appointed, in my perspective would be most unfortunate to say the least.
George as Commissioner is a good choice and we wish him all the best.
Let us support the new commissioner- designate, as crime is up 19 percent year to date when compared with 2016.  The selection process was transparent and fair.
What is your perspective?  This is ours.
Hopeton O’Connor-Dennie is SIC Visin Newspaper.