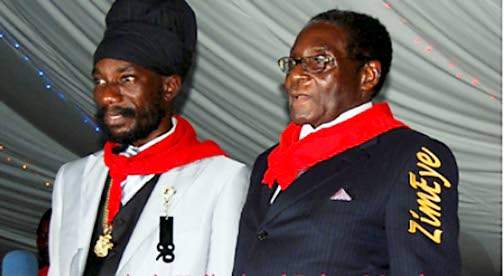 As we continue to mourn Robert Mugabe it is important to note that Jamaican Reggae artists were involved in a direct way through their songs and presence in Zimbabwe while Mugabe was active in the politics of the day.

The entertainers who met Mugabe have left with admiration for him “He is not the monster that he has been made to appear in the media” This is most unfortunate to say the least. We are not saying Mugabe is a saint nor is due for same. Be assured there is no attempt to set the stage to beautify Mugabe which as you know is the first step to sainthood. Mugabe has done what is close to a miracle to remove white supremacists from power. Yes. Mugabe committed many sins, but the racist minority Ian Smith government that ruled Rhodesia now Zimbabwe were no saints either. In fact they were monsters. So pot cannot curse a kettle that it is too black.

Both the white supremacists and the black liberators were on a collision course. The conflict was a bitter one. The white supremacists were hell- bent on holding on to power which entailed controlling 95 percent of the nation’s wealth. Ian Smith as you will recall declared a Unilateral Declaration of Independence (UDI). The black liberators had every right to want to disturb the apple cart. As a black nationalist myself no apologies are due. No debt is outstanding. If you are a white supremacists, please do not hold your breath. You may get paid when the Jamaican Turkey better known as a John Crow gets teeth. Some of us put evolution above injustice. Mugabe was the victim of inexcusable injustice. Full stop.

The white supremacists jailed Mugabe without trial for 10 years. This was despicable. We all deserve the right to due process. Shame no you white supremacists. History will be kind to Mugabe in time. The majority of blacks had to do what they had to do. The status quo could not be allowed to remain indefinitely. This is our position. Feel free to disagree.

Hopeton O’Connor-Dennie is SIC for Vision Newspaper and is a veteran journalist who has watched politics internationally for at least 50 years.