Perspective: THE TRIALS OF BLACK MEN

Blacks in a white dominated society ought to be on their best behavior. There are documented cases, however, of known revolutionaries who have been
taken down and it begs the question, was it because of their color or was it in any way self-inflicted? Apparently, their ambitions were seen as a threat to
the status quo and to misguided individuals whose only purpose in life is to tear down those who are either successful or try to break the invisible ceiling by choosing a course of hitherto uncharted waters.

We have seen too many examples in the USA of prominent blacks taken down by either the CIA, FBI or a white-controlled media. Marcus Garvey’s Black
Star Line concept/empire was infiltrated and he was eventually charged and convicted for mail fraud.

Malcolm X was destroyed, Martin Luther King Jr. was assassinated by unknown plotters. Kobe Bryant was trapped … he got away from the hunter’s snare.
Tiger Woods was brought down by a white woman he married. OJ Simpson was charged for murder, beat the charges, but was later trapped for
racketeering, etc. The current imbroglio in which Chris Gayle has found himself is another example of us not being on guard at all times. To use a
cricketing term “he has been caught in the slips”. We seem not to learn from other’s misfortunes, mistakes, or examples. To say we are accident prone …
is so evident that even the legally blind can see through that fact.
We seem to mess up and wallow in it more than a pig in a jacuzzi of its own doing. Why we are so pig-headed, only heaven knows? We cannot allow our
sexual prowess or apparent insatiable desire for sex and or matters sexual rule our better judgement. In short our pricks cannot be more endowed than our
brains. 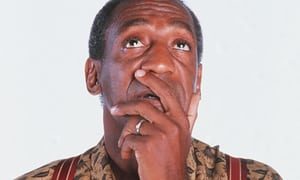 One cannot say too much about Bill
Cosby’s innocence or guilt at this stage. Anyone can make allegations which, when tested, prove to be false, malicious and without foundation or merit. This distinct possibility should not be ruled out or discounted. Let us bear in mind that these matters are or may soon be subjudice … and as such let the law run its course. If justice is colour blind then we have nothing to fear. We dare not fail to keep an open mind. It would be unfair for us to not allow the brother to be denied a fair trial.
We just need to be circumspect as we seem to be judged by different standards if we have a certain pigmentation, race or from a certain social class.

We have seen the events of Ferguson, Missouri, Chicago police atrocities against blacks, Rodney King beatings … another black man as victim, and the list goes on. Sex seem not to matter as our black sisters are also targeted. They are beaten, shot and are preyed upon or sexually assaulted by white depraved men. As a black race we have always been treated as the underclass. Even when we get educated and have broken through the invisible ceiling and climb to the top there are those determined to drag us down.

Well documented is the treatment of Obama by Donald Trump and the scant regard paid to Obama Care … the president’s Healthcare Plan by a bad minded if not racially motivated Republican Senate and HOUSE. Their motivation is as risky trying to read tea leaves. They even came up with a Tea Party Movement to destroy the Democratic Party.

Donald Trump never failed to trumpet the nonsense that Obama was not born in America and as such is not an American. This would disqualify Obama from being President of the USA. Even when presented with irrefutable evidence of a valid birth certificate, he never apologized publicly for his gaffes.
Criminal charges may not be morally correct especially if it contains juicy allegations, but such are not convictions. There is no need for us to roll over and play dead. We must stand up and fight to regain our self-respect. The nuts will always try their thing and will stop at nothing to achieve even their immoral ends. Donald Trump immediately comes to mind.

I am multicultural … the colour of a person’s skin is neither here nor there to me. It is their contribution to nation building and racial harmony that really matters. I support interracial marriages, mixed race schools … and no form of racial segregation.

Let us wise up brothers … as Garvey reminds us “up you mighty race” we can achieve whatever we want despite the odds.

Hopeton O’Connor-Dennie, is the senior International Correspondent & photojournalist for Vision Newspaper Canada. He holds the keys to four American cities, is an Honorary Secretary of State for Indiana, and Honorary Citizen of Indianapolis, USA.