Perspective: Trump Picks Fight With WHO? 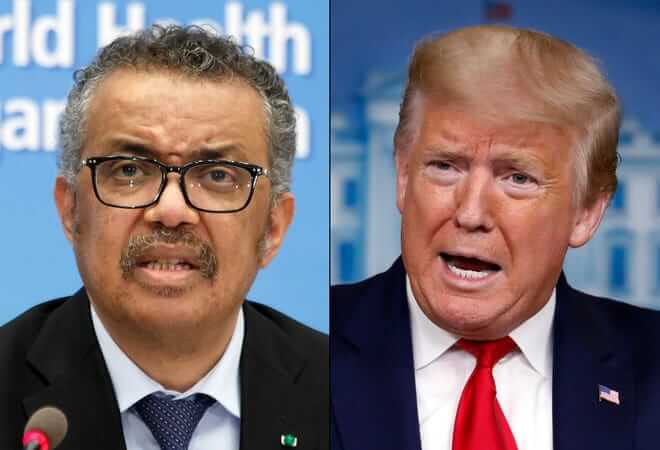 Did The WHO Drop The Ball?

We note with interest if not disgust that President Donald Trump, if not, is the most powerful of world leaders has chosen to pick a fight with the World Health Organization (WHO). What Trump says can change the fortunes of international currencies or the stock markets. For example should there be news reports of his ill health, God forbid, this can shake world markets. Say for instance, should it be reported that he has a terminal illness. As a consequence we cannot dismiss his utterings or twitter meltdowns as if it they were a walk in the park on a Sunday afternoon. His impact on world affairs can be most impactful to say the least. For example: The recent hospitalization of PM Boris Johnson due to COVID 19 saw a dip in currency markets. He also leads a very powerful country, the United Kingdom. Much less Trump who leads the most powerful country in the world The United States of America (USA). with the most modern and powerful army.

Media reports and images of Trump threatening the WHO is not healthy.

We do not hold any brief for any one. As far as we are concerned no one is above the laws of scrutiny probity, and accountability. When you offer yourself to serve publicly that acceptance of responsibility cannot and aught not to be taken lightly. Such recipient or holder of high office needs to realize that to whom much is given, much is expected. To put it another way, uneasy is the head who wears the crown. We note PM Boris Johnson’s illness, the UK is reeling .. we wish their leader, a speedy and complete recovery. We hope he had heeded WHO’s advice not to shake hands to avoid the C19 virus from spreading.

Media reports and televised images of Trump”s threat to withhold funds and accusing the WHO of dropping the ball literally by not allegedly declaring the Novel Corona virus, now referred to as COVID 19 earlier, the pandemic seems to be the basis for Trump’s verbal assault on the respected world body the WHO … is strange. Is Trump correct? Let us examine his strange claim.

When to declare an event an emergency is not an easy call to make. For example rains begin to flood say a few streets and suddenly you learn that flood waters have marooned your treasured feline on top of a water tower? Would that be solid enough grounds for an emergency declaration?

How is a Pandemic Declared?

This is not how such declarations are supposed to be made. There has to be widespread devastation or the perceived potential that such an event could negatively impact many lives even to death or cause severe property damage for such a declaration to be made. This act alone usually opens the floodgates for Federal or international funding and or assistance. It could and oftentimes allows for national guards or national reserves troops or even the main army itself to be called out to assist in restoring normalcy or civil order. It is usually not the first line of defence used for declaring emergencies. The declaration of an epidemic to be upgraded to be declared a pandemic has to pass certain established tests or protocols. We are not privy to such closed door deliberations, but based on experience and observations one is compelled to conclude that such is not done lightly. Of course we could be wrong. A question that would be asked is how widespread is this event impacting regions or what percentage of the world’s population are likely to be in danger.

What is a pandemic? The prefix “pan” means widespread. You will recall that the initial outbreak of COVID 19 occurred in China and then spread like wildfire to the West. China is not a democracy and openness is not their modus operandi. A free press as we know it, does not have unfettered access to info or can operate as it sees fit. There are serious restrictions on say journalists and their movements. China is a dictatorship.

WHO’s Director General, an Ethiopian and Microbiologist
Dr. Tedros has asked political leaders to “unite” against the C 19 virus. “Do not politicize the application of the COVID 19 treatment” it was a strident Director General of the WHO Dr. Tedros who was responding to comments by President Donald Trump. He also slammed as racist a suggestion by two French Drs/Scientists that Africans be used as the race to do trails for a vaccine to cure C19. Dr. Tadros responded with a defiant “no way”. Reports not denied, are that Dr. Tedros’ life has since been threatened.

Trump’s America is the Epicentre of this Pandemic to date

It is ironic that as Trump chooses to pick a fight with the WHO and by threatening to starve it of much needed funds, while his homeland has not been able to stem deaths by this COVID 19 pandemic.

Canada has 4000+ deaths yet the USA has 200, 000 deaths and climbing uncontrollably. It appears to me that it is the quality of national leadership that will seriously make a real difference in this COVID 19 fight. Worldwide 1.6 million confirmed cases. 300,000 recovered from C19 to date.

Jamaica’s Cabinet led by PM Andrew Holness, on the other hand listened to the WHO from day one and now has 4 deaths … no reported new confirmed cases in four or so days with 63 confirmed cases overall and falling. You be the judge.

Let us not truly drop the ball by resorting to degrading innuendos or racist overtones. Is it because the WHO is headed by a black man why Trump is attacking same? The world can be better served without such assertions by Trump. Is there any credible evidence that the WHO may have dropped the ball? As usual the verdict is yours.

What is your perspective.? This is ours.

Hopeton O’Connor-Dennie is Honorary Secretary of State for Indiana, USA, in addition to being Senior International Correspondent for Vision Newspaper Canada.