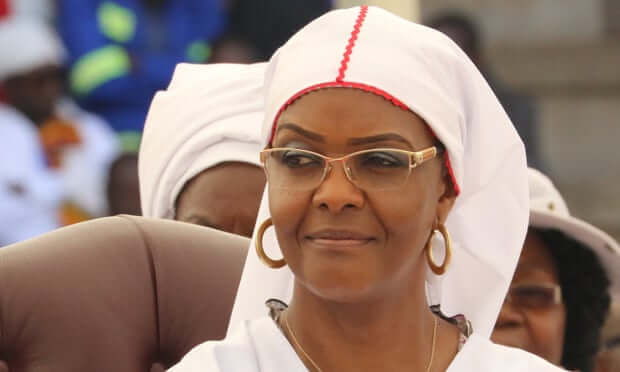 Did Wife Grace Cause Mugabe’s Downfall?

There is considerable speculation as to the whereabouts of Grace Mugabe, President Robert Mugabe’s second wife who he married in 1996. She bore him 3 children. Two boys and a girl. The boys are in their 20s.

She has not been seen publicly for sometime. Speculation is that she is holed up in their opulent mansion in Harare, the capital of Zimbabwe. It is not believed that she has fled the country.

She has been so nicknamed due to her passion for luxury designer brand name clothing and accessories. She shopped compulsively and was not short of cash. She splurged at whatever she wished. A former typist she rose from rags to riches. Rising from relative obscurity to become First Lady of Zimbabwe. She was later made Vice president of Zimbabwe, Grace was believed to be widely hated in her homeland. Jealousy of her and her extravagance may have led to her downfall. She would not be the fist woman of power to face that fate.

We know of the resplendent queen of France who was beheaded by the guillotine. Queen Antoinette was renowned for her lavish spending and extravagant lifestyle of the 1700s. She once told her subjects: “Let them eat cake”. This led to resentment and she was subsequently beheaded by the guillotine. This sparked in France what is now known as the French Revolution of 1789. This historic event is now celebrated in France as Bastille Day. He husband who was king was also executed. There was a moral turmoil that was sweeping across France during that era. History has a way of repeating itself. Is there any similarity with Zimbabwe?

We do not know for sure if it was her ambition to replace Robert Mugabe as President or was it Robert Mugabe himself who wanted to hand pick his successor by handing power over to his wife so as to create a dynasty that led his detractors to plot to remove him. The unfortunate thing for me is that it was the army who is sworn to be loyal to the President that plotted to remove Mugabe from office. That is a serious betrayal of trust from my perspective.

The sacking of VP Emmerson Mnangagwa by Robert Mugabe his long time ally and enforcer seems to have been the last straw. This was seen by the power seekers as a purge to pave the way for Grace Mugabe to succeed her husband as president. The G40 was aligned to Grace. These were young brash turks who were relics of the liberation wars of the 1970s and 1980s … they were power hungry and were close to Mnangagwa. The G40 had no roots in the politicized military. “It was a creation of the presidency according to Rupiya.

He is an analysis and former General in the Zimbabwean Defence forces. This appears to be a realignment of the contending forces. The army felt it had to move against Gucci Grace. They had to remove Robert Mugabe to achieve their ends.

There is the counter argument that Mugabe overstayed his welcome as Zimbabwe’s leader. For me that is rubbish. The army’s role is to uphold the rule of law and be loyal to the head of state and ultimately the Constitution. The army is expected to be a stabilizing force and the last bastion of authority in any society.

We may never know what was the real reason or tipping point that led the army’s leadership to stage a coup against President Robert Mugabe. One thing we can agree on is that a colourful political rein came to an unceremonious end and it was bloodless.

Did Gucci Grace lead to Robert Mugabe’s fall in grace and his ultimate removal from office.? We may never know the answer to this question. What of her future? Does she have a future in Zimbabwe or she has enough money to retire in wealth and comfort.

Hopeton O’Connor-Dennie is a veteran journalist of 50 years who has written across three continents. He is also Senior International Correspondent for Vision Newspaper Canada.