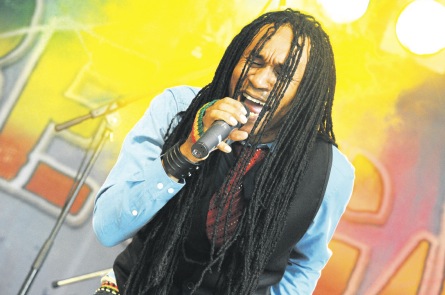 The track, co-produced by Lloyd and saxophonist Dean Fraser, is on the Blacklight label.

“Blood On Your Hands will be officially released next week, even though it’s already getting rotation. It’s a song with a message … what Jamaicans refer to as culturally aware,” he said.

The effort is the first from his yet-to-be-titled album slated for next summer.

According to the Nouveau-Rastafari singer, the single deals with his personal pet peeves and how they impact Jamaicans on a whole.

“I’m trying to start a conversation. The song deals with corruption, paedophilia, you name it. But it also deals with how we, as a nation, will rise from this negativity,” he said.

The Wake Dem Up singer said the time has come for us to break free of those shackles that have been holding us back.

“We have become mired in negativity and frivolity. With self-awareness, we can overcome. A lot of people are looking to us for inspiration.”

A former broadcaster and a cast member of the television series The Blackburns, Lloyd, this year, marks 20 years in the music business. He has two albums to his credit, Transitions (1999) and Stories From I Father’s Country (2011).

The singer said his upcoming album will be different from previous studio efforts.

“I will have more production input on this album. It will have live instruments and the message will be more cohesive. It’s a concept album,” he said.

“My goal is to make people feel better about themselves. I want to leave this world a better place than how I came and saw it.”

Lloyd, who recently returned from a three-month tour of Europe, said he was encouraged by the response.

“I had 12 dates in Germany and the response was overwhelming,” he said.

Lloyd said he has no concerns about the genre’s poor record sales.

“Reggae music will always do very, very well. Just put out good material and be consistent,” he added.

For the original report go to http://www.jamaicaobserver.com/entertainment/Peter-Lloyd-starts-dialogue_15368839