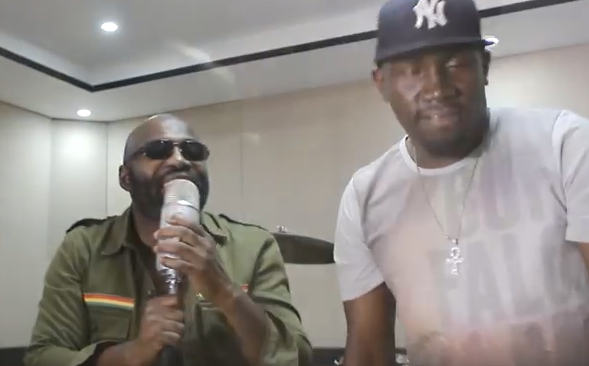 With their recent win of the coveted title of America’s National “US Rumble Champion”, Platinum Kids continue to ride high. Over the past two weeks the dynamic duo, Paul and Marcus, find themselves trying to balance the demand for interviews, bookings as well as preparing for international tours.
“These past two weeks has been tremendous, we have received so many calls, messages and support from people we didn’t even realize follow the clash culture. We give thanks for all the words of encouragement and support we have been receiving” says Paul of Platinum Kids.
This week Grammy award winning Reggae artist Richie Stephens released his video ‘Sound Boy You Dead’ Richie Stephens & Steelie and Cleevie, which features some of sound system culture highly acclaimed selctors/DJs. For Platinum Kids this is a great feeling to be among some of sound system culture greats.
” The feature in the video is a great look, to be among some of the sound culture great selectors and DJs like, Ricky Trooper, Richie Poo,  Billy Slaughter, Gee Fus and we bredda Foota Hype its a good look. We were in Jamaica and linked up with Richie Stephens while in Jamaica and he let us know him a shoot a sound boy video and we should be in it. So we just made ourselves available and the rest dem say is history” says Marcus of Platinum Kids.
The video depicts a group of sound men in the yard of Richie Stephens studio playing a game a dominoes and reminiscing on how they deal with a sound boy in a clash setting. The sound boys see Richie Stephens and immediately they request for him to go into the studio and record the dub for the clash. Platinum Kids can be seen throughout the video vibe-ing to the track as well as making a statement “sound get lock off”.
The video, which was shot in Kingston Jamaica, garnered a little over a thousand views in a few hours and continues to garner good attention.