PM Holness Calls for the Lifting of Embargoes 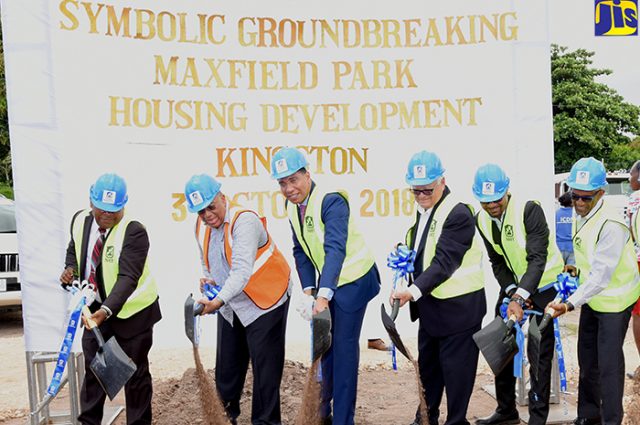 The standard of living of residents of Maxfield Park in St. Andrew is expected to be greatly improved with the development of an $860-million housing project in the community.

Prime Minister, the Most Hon. Andrew Holness, today (October 3), broke ground for the Maxfield Park Development Project, which will see the construction of another 210 housing solutions for National Housing Trust (NHT) contributors.

Mr. Holness said through these housing development projects, the Government aims to give all Jamaicans the euphoric experience of owning their own home.

“It’s not just getting the better housing solutions, but just changing the way that people live can literally transform and uplift the lives of the people,” he said.

The project, which is being undertaken by the NHT, will involve the development of 6.14 acres of land along Ricketts Crescent where, initially, the entity will conduct preparatory works to include demolition and removal of some existing structures; disconnection and removal of informal water and electrical distribution systems.

The Prime Minister noted that the project was conceived over a decade ago and is one of the housing projects the Government pulled out of the pipeline and brought to the point of implementation.

“It makes no sense that you have wonderful concepts, wonderfully well-laid plans, but at the end of the day, it’s not implemented. So the (new) mandate (of the NHT) was to expedite the implementation of housing projects,” he said.

Mr. Holness noted that the NHT, which was initially given a target of 15,000 housing solutions, now intends to provide 23,000 units for Jamaicans by 2021.

In the meantime, Leader of the Opposition, and Member of Parliament for the area, Dr. Peter Phillips, welcomed the project, which he said represented “continuity in policy”.

“What is important is that the present Government came and found a project that was under way and… they continued with the project. I want to personally say thanks and express my appreciation,” he said.

He also praised residents of the Maxfield Park community for their patience in “staying the course”, for attending sessions with the NHT, and becoming NHT contributors.