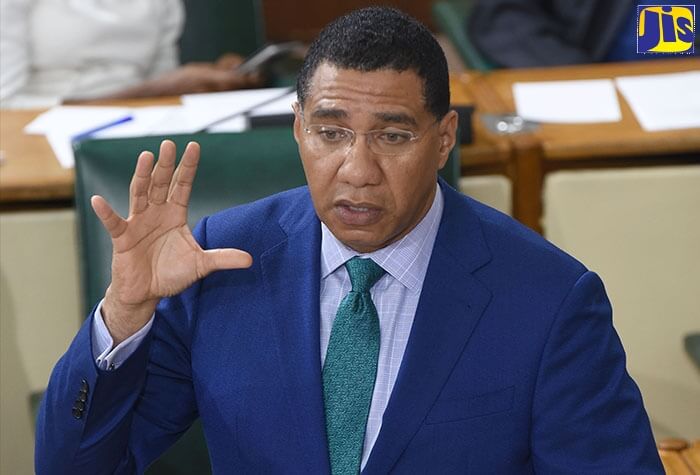 Prime Minister, the Most Hon. Andrew Holness, emphasises a point while delivering a Statement in the House of Representatives

Prime Minister, the Most Hon. Andrew Holness, is calling on leaders of developed countries to fulfil their commitments for climate financing agreed to at the Paris Climate Conference (COP21) in 2015.

Developed countries had committed to mobilising US$100 billion per year by 2020 to assist vulnerable countries, such as Small Island Developing States (SIDS) to respond to, and tackle the intensifying threat of climate change.

“This is not seeking charity and further aid. I think that this is an enlightened response to the global threat of climate change enshrined in the COP21 Paris Agreement, and what I was asked to do by the UN Secretary General along with the President of France and Emir of Qatar is to raise awareness, carry the conversation, increase the ambition of the global community to fulfil this obligation,” he said.

The Prime Minister was making a statement in the House of Representatives on October 22, following his recent visit to the UN Climate Action Summit 2019 and Climate Conference.

Mr. Holness said the $100-billion goal translates on a national scale into more grant and loan funding for community-based projects such as water irrigation and storage, renewable energy and the integration of more efficient technologies in energy production, the restoration of coral reefs, early warning systems for fisheries and agriculture, among others.

“Today, we are less than three months away from 2020, and the global progress and action towards making financing available to countries like Jamaica is woefully inadequate. There is greater understanding as a result of the Climate Action Summit amongst world leaders… but even though we have the agreement and we have COP21, I don’t think we are where we should be today if we are serious as a global community to avoid the foretold effects of climate change, particularly Small Island Developing States,” he said.

Meanwhile, Mr. Holness noted that prior to the UN Summit, he co-hosted with the Prime Minister of Norway a high-level luncheon at the United Nations Headquarters to bring together donor countries to pledge more money for climate change.

The Prime Minister said ensuring a well-funded Green Climate Fund is critical to demonstrating an increase in public climate finance and to drive momentum towards enhanced national targets for sustainable development.

He informed that at that luncheon, the Netherlands, Sweden, Denmark and Switzerland made new financial contributions. These countries, together with Germany, Luxembourg, Norway, South Korea, France, Sweden and the United Kingdom added more than US$7.5 billion in financial commitments for climate action.

“This is not small money… but it’s way below the target that is necessary, and especially when you would have to consider that you would have to spend significant resources in Africa for example, in parts of Asia, and the Caribbean,” he said.

The Prime Minister added that the cost of recovery from one single hurricane can severely impact development.

In the meantime, the Prime Minister said Jamaica has received more than US$1.8 million in grant funding from the Green Climate Fund.

He said the funding will be dedicated to restoration and forest management activities and to strengthen the island’s national agencies to tackle the challenges brought by climate change.

He noted, further, that Jamaica will be accessing a grant to support the strengthening of the Jamaica Stock Exchange to be able to raise funds specifically for climate smart projects, such as clean transportation and renewable energy projects.

Meanwhile, he pointed out that Jamaica is playing its part in fighting climate change, adding that for the first time, the Government has transferred $2 billion to the Contingencies Fund, to specifically provide for the possibility of natural disasters.

“Again that is not enough, it’s a beginning, but at least we have started. It is our intention to continue to do this as part of our strategy of insuring against the risks of climate change…that’s part of our climate-proofing our economy,” he said.