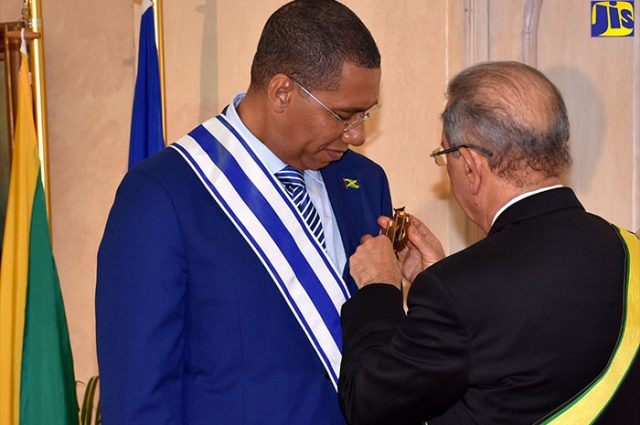 Prime Minister, the Most Hon. Andrew Holness (left), is conferred with the Order of Merit of Duarte, Sánchez and Mella in the rank of Grand Cross with Gold Breast Star by President of the Dominican Republic, His Excellency Danilo Medina Sánchez, during a State Luncheon at King’s House today (November 27

Prime Minister the Most Hon. Andrew Holness, and President of the Dominican Republic, His Excellency Danilo Medina Sánchez, were on Monday (November 27) conferred with national honours of their respective countries during a State Luncheon at King’s House.

The Order of Excellence is one of the six national orders of the Jamaican honours system, and it is only awarded to present and former foreign heads of State or government.

The Order of Merit of Duarte, Sánchez and Mella (Orden al Mérito de Duarte, Sánchez y Mella) is the principal order of the Dominican Republic. The order is divided into seven grades, with the Grand Cross with Gold Breast Star awarded to foreign chiefs of State and to former presidents and vice-presidents.

In his remarks, the Governor-General said President Medina is being recognised for his contribution to Caribbean development, beginning within his own country and extending to the partnerships that exist within the region.

He told President Medina, who will be attending the United Nations World Tourism Organization (UNWTO) Global Conference in Montego Bay, that “I have no doubt that your presence and contribution to the (conference) will add significant value to the expected outcomes”.

The Governor-General expressed confidence that President Medina’s visit will contribute to the strengthening of the bonds of friendship that exist between Jamaica and the Dominican Republic.

“In this highly interconnected world environment, we all have an obligation to work together in ways that will enure to our economic and social advancement. Jamaicans have shown throughout history our capacity to be creative, to overcome challenges and to take bold decisions. I expect that we will continue to demonstrate that capacity in our international engagements to the benefit of us all,” he said.

The Governor-General also congratulated Prime Minister Holness on the honour conferred on him by the Dominican Republic noting that “we continue to wish you well in your tenure”.

In his remarks, President Medina thanked the Jamaican Government for bestowing him with the honour. “I know it is not an honour only for me but for the people of the Dominican Republic,” he said.

For his part, Prime Minister Holness said he was most pleased to have been nominated for the conferral of the prestigious honour of Order of Merit of Duarte, Sánchez and Mella.

“I am both honoured and humbled by the fact that this is the highest honour that can be conferred on any foreign head of government. I pledge to fulfil the expectations of this great honour with distinction as I look forward to our further collaboration at the personal, national, regional and international level as we strive to secure a better quality of life for the people of our countries and the world,” he said.

The decree read that Prime Minister Holness has a distinguished career as a public figure, member of Parliament and Head of Government making notable contributions to development, especially in matters of education and the promotion of social inclusion.

It said further that the Prime Minister was being recognised for his leadership role in the Caribbean region, promoting dialogue and consensus in the search for solutions to common problems, his friendship and solidarity towards the Dominican Republic, and “making concrete efforts to bring our governments closer and work together towards common goals”.

President Medina arrived in the island on Monday (November 27) for a one-day State Visit.

He departed Kingston later in the day for Montego Bay where he will participate in the United Nations World Tourism Organization conference from November 27 to 29 at the Montego Bay Convention Centre.