Speaking in Central Jamaica, Clarendon Parish last week, Thursday, October 7, 2021 the PM reeling from having to dump 55,000 vials of the Oxford AstraZeneca Covid-19 Vaccine on September 29, 2021 a gift from UK with a 60 day expiry time frame. 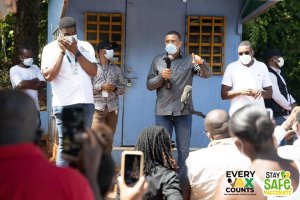 “I am prepared to listen and answer concerns people may have as to their reluctance to take the jab.  This consultation cannot be indefinite … by the end of the month a decision will have to be taken. In Canada and elsewhere they have been vaccinating their citizens from May 2020. Jamaica started vaccinating our citizens long after.

Those who want freedom from lockdown must realize that if they fail to take up the vaccine.  We cannot return to normal so they have to be responsible. You cannot have it both ways.”

It was at this said Clarendon gathering that the PM stated also:

“A new target of one million jabs to put vaccine in arms by the end of November 2021 has been decided on by the government.”

So declared a strident PM Holness inter alia, who also dismissed media criticisms that there is division in the government he leads on the mandatory vaccination issue.

“There is no division in my government, I do not tolerate such conduct … we have to consult with each other and bear in mind any legal hurdles which may have to be overcome.”

Based on the PM’s tone and choice of words he seem to be subtly confirming the magnitude of issues he faces in his cabinet.  We have no means of confirming this speculation as meetings of the cabinet are secret.

We hope this one million target will be met by November’s end 2021.  This is quite achievable.

Hopeton O’Connor-Dennie is a poet, elegist and senior international journalist who writes for Vision newspaper.