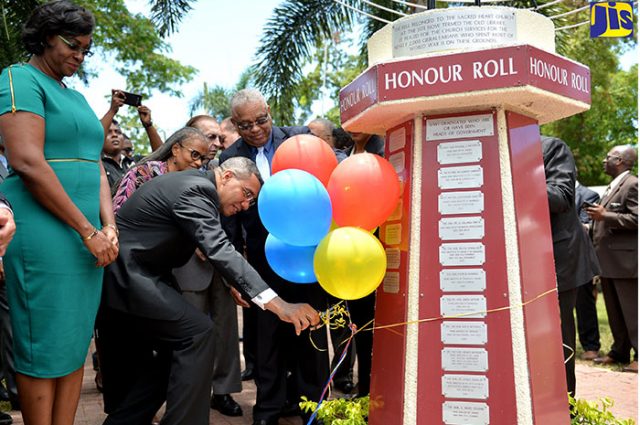 Prime Minister, the Most Hon. Andrew Holness, yesterday (May 3), became the 18th Head of Government to be inducted into the Park of Honour located at the University of the West Indies (UWI), Mona.

Established in 2005, the park honours UWI graduates who have been or are serving as CARICOM Heads of Government.

The Prime Minister, who holds a Master of Science in Development Studies and a Bachelor of Science in Management Studies from UWI, thanked his alma mater for bestowing him with the honour of inscribing his name at the monument at the park. He said he was very humbled by the gesture.

Mr. Holness is the youngest Prime Minister to have graduated from UWI Mona and the 23rd graduate of the UWI to be installed as a Head of Government.

In his remarks, Pro Vice Chancellor and Principal, UWI, Mona, Professor Archibald McDonald, hailed Mr. Holness as one of the “greatest champions for learning and education”.

He noted that Prime Minster Holness has distinguished himself as a leader who recognises the importance and transformative effect of a solid education and the opportunity it provides to enhance economic growth.

“The UWI is pleased to applaud the work of one of our most distinguished graduates, who has continued to fight for the rights of all to enjoy the many benefits and opportunities provided by a sound education,” he said.

“I hope that the legacy you continue to build is one that reinforces to current and future students that education is the key and that their dreams and aspirations can be achieved with hard work, commitment and a sound educational foundation,” he added.

Professor McDonald also thanked the Prime Minister for continuing to support the development of UWI, Mona.

In the meantime, Vice Chancellor for UWI, Professor Sir Hilary Beckles, credited the “first-class education” the Prime Minister received at UWI for the quality leadership he has been demonstrating.

He also commended the Prime Minister for his commitment to economic and social growth.

Before becoming Prime Minister, Mr. Holness distinguished himself as Minister of Education, where he undertook fundamental reforms to the system.

Also, to his credit was the introduction of the Career Advancement Programme (CAP) – a post-secondary technical and vocational training programme for unattached youth.

Among the dignitaries in attendance were former Prime Ministers, the Most Hon. Edward Seaga and the Hon. Bruce Golding; Opposition Leader, Dr. Peter Phillips; Government ministers; and members of the diplomatic corps.