Prime Minister, the Most Hon. Andrew Holness (centre) speaking to residents in Rasta City located in Tivoli Gardens, following a tour of the area on Saturday (November 30).

Prime Minister, the Most Hon. Andrew Holness on Saturday (November 30) toured sections of Tivoli Gardens in West Kingston to assess the needs of residents, particularly those of the elderly and shut-ins.

The tour also included site visits for possible housing solutions to be constructed in Rasta City, an area in Tivoli Gardens and Denham Town. 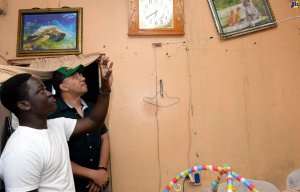 Prime Minister, the Most Hon. Andrew Holness (left) listens to resident, Shacquille Henry, as he describes the poor living conditions in his apartment at Rasta City located in Tivoli Gardens, West Kingston. This was during a tour of the area on Saturday (November 30).

Rasta City consists of an apartment building that was constructed over 50 years ago, but has since deteriorated, resulting in poor living conditions for residents.

“Your conditions here are not something that the government is proud of, and this constituency is not the only constituency that is suffering from the kind of deterioration in the housing stock and urban blight. But I believe that your situation requires attention,” Prime Minister Holness said.

During the tour, Mr. Holness was able to interact with residents, and promised to offer some form of assistance in the near future.

“The conditions in Rasta City are particularly disturbing and require urgent attention. I’ve also seen where housing projects which were started in the 70s and 80s, many of them remain incomplete and residents who were located in areas with the expectation that the housing solutions would be completed so that they could take them up, they still remain in those temporary structures and the government has to complete those programmes which were started,” he said.

Prime Minister Holness also cited the connection between the poor housing conditions and the crime situation that exists in West Kingston. 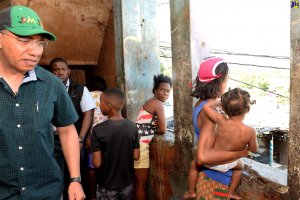 Prime Minister, the Most Hon. Andrew Holness (left) walks through the halls of an apartment building in Rasta City located in Tivoli Gardens, West Kingston during a tour of the community on Saturday (November 30).

“I’m happy to say that the crime situation in this constituency and in particularly, in Denham Town, has improved since the Zones of Special Operations and certain other interventions… murders in particular have gone down,” he stated.

“However we still note that there is violence, particularly domestic violence and I am urging the citizens, regardless of the conditions under which you live, regardless of the difficult economic circumstances that you’ve face, that is not an excuse for living bad with one another,” he added.

Meanwhile, resident of Rasta City, Shacquille Henry told JIS News, that he was pleased with the visit from the Prime Minister, adding that he was looking forward to the possible development of new housing solutions in the community.

“I feel elated because we have been waiting on the Prime Minister to visit over by Rasta City from last year. We have heard about the Rasta City Housing Development and we are keeping our fingers cross because we really want the development to happen,” he stated.

“The living conditions of the citizens are unbelievable and over the past weeks, we have been experiencing increased rainfall and when it rains, it leaks and I want the Prime Minister to come through with the housing plan,” he added.

Another resident, Shikara Dockery was also pleased that the Prime Minister visited the community.

“For years, we’ve been told that there would be some form of housing development here and we have yet to see anything happen. I know with the Prime Minister, and how he is working, I’m sure that this project will begin really soon,” she told JIS News.