PM Urges Jamaicans to Give Talents to Nation Building 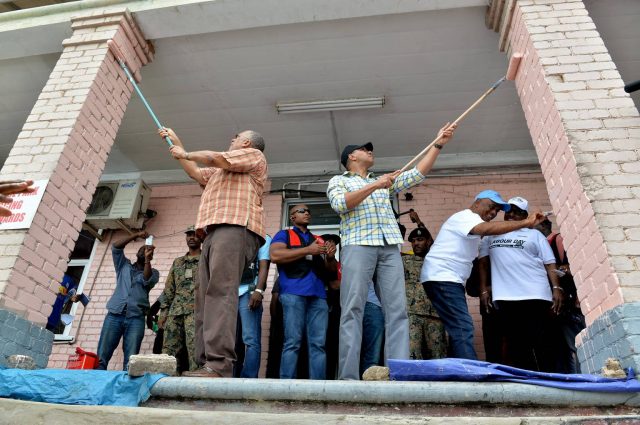 Prime Minister, the Most Hon. Andrew Holness, is imploring all Jamaicans to use their God-given talents to build the country.

He made the call as he joined scores of volunteers at the Central Police Station in downtown Kingston today (May 23) to beautify and renovate the facility as part of the 2017 National Labour Day Project.

Mr. Holness lauded all the volunteers for giving their time and effort to restoring the almost 100-year-old police station.

He noted that Labour Day is not just for “ceremony, (it) is for work” in building and uniting the nation.

He urged all Jamaicans to become active citizens in beautifying, protecting and preserving their surroundings.

“I encourage all of you to do some work, if it is only at the verge at your gate. Get a little bit more adventurous and call out your neighbour and do some work on your street,” he said.

For her part, Minister of Culture, Gender, Entertainment and Sport, Hon. Olivia Grange, said the focus on the Central Police Station forms part of activities to mark the 150th anniversary of the Jamaica Constabulary Force (JCF).

She said renovation and beautification work will be undertaken at all the other police divisions.

“This Labour Day, we dedicate our energies to restore, preserve and beautify our national landmarks and monuments, from villages, towns and communities through cities and parishes,” she said, noting that thousands of Jamaicans are working right across the island for the upliftment and betterment of each other.

In saluting the workers of the country, Leader of the Opposition, Dr. Peter Phillips, said the observance of Labour Day brings into focus the value of work.

“Labour Day celebrates the role and contribution of the workers of Jamaica, who started the movement that gave Jamaica its independence and who have sustained the Jamaican nation ever since,” he said.

Hailing the “extraordinary” work of the police officers at the Central Police Station, Member of Parliament for the area, Rev. Ronald Thwaites, said the station represents “a citadel of reconciliation and peace for the citizens”.

“The police station is a place of reassurance and protection, and the men and women, over the decades, have offered this to these communities. We thank them, and we are grateful for all those who combine their efforts today,” he said.

Commissioner of Police, George Quallo, noted that “giving back to community and self is one of the greatest things that anybody can involve themselves in”.

He noted, further, that the Central Police Station has been an integral structure in the JCF for several decades.

He said national security should not be seen as the sole responsibility of the force, and urged Jamaicans to play their role in the fight against crime.

The scope of work at the Central Police Station included cleaning, bushing and painting as well as landscaping.

Groups from the Ministry of National Security; Jamaica Defence Force (JDF); Jamaica National Foundation’s Action Jamaica; and the Lay Magistrates Association of Jamaica, Kingston Chapter, among others, were involved in the project.

Workers’ Week and Labour Day 2017 are being observed under the theme: ‘Restore, Preserve, Beautify’.

Activities were coordinated through a Labour Day Secretariat under the Ministry of Culture, Gender, Entertainment and Sport.