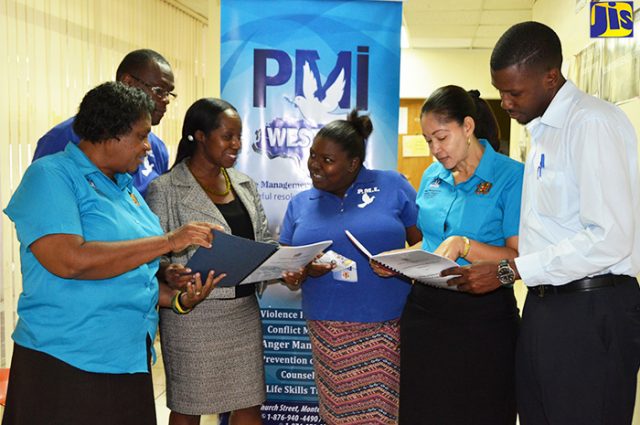 The Peace Management Initiative (PMI) in western Jamaica has been playing a major role in curbing crime and violence as well as creating opportunities for youth in the parishes of St. James and Westmoreland.

This is being done through its Violence Interruption project, which is funded by the Citizen Security and Justice Programme (CSJP).

Programme Coordinator for PMI Western, Sheila Pryce Brooks, tells JIS News that the work of the agency in St. James and Westmoreland has been deliberate, with a strong focus on social programmes for at-risk youth.

“We use a range of interventions, projects and programmes that can reduce the level of violence. It’s also about empowering communities to stand up and take control of the areas in a sustainable way. The main project that we are currently involved in is called Violence Interruption, focusing on 10 communities in St. James and 10 in Westmoreland,” she notes.

Mrs. Pryce Brooks says the PMI’s approach to “rescue” at-risk persons is to work with State agencies, as well as non-governmental organisations, in implementing projects and programmes that will bring about behaviour change, with a view to having them refocus on becoming productive members of society.

“The PMI is well recognised in the communities we work in. We are seen as an advocate for the people in the communities and championing their cause. We are often approached by community members to intervene in issues that are going on in their communities. We really do whatever it takes to bring calm and peace to the communities,” she tells JIS News.

Brenda-Lee Black Samuels, Violence Interrupter working in the Adelphi, Cambridge and Lilliput communities of St. James, says the impact of the agency’s work on the lives of well over 100 at-risk youth in those areas has been a game changer.

“At-risk youth have been voluntarily joining the programme and responding positively to the therapy we have been giving them,” she says.

The programmes implemented by the PMI are largely driven by data collected from its stakeholders in the communities.

Data Analyst at the PMI, André Reid, says the data gathered seeks to uphold the three main platforms of the programme – “to identify at-risk youth, to treat them and to change behaviour norms”.

“We are now monitoring about 1,100 youngsters in the 10 communities in St. James. They fall into the age group 15 to 29, and we are monitoring them on a daily basis. In my view, the results are indeed positive,” she notes.

Social Worker, Howard Lewis, who is the Violence Interrupter for the Canterbury community in downtown Montego Bay and Salt Spring, says the work of the PMI has been changing the stigma attached to those areas.

“We are definitely seeing where they (at-risk youth) are coming forward and indicating an interest in getting involved in our programmes,” he says.

Senior Social Worker for the PMI in St. James, Maxine Matthews, tells JIS News that the social interventions have been working.

She notes that the PMI targets schools and community groups, and works with other state agencies to ensure that those affected by violence. as well as those who are deemed at-risk. are encouraged to participate in behavior-changing projects.

Supervisor at the PMI, St. James, Lavern Johnson, tells JIS News that the 20-member Violence Interrupter team has been making a significant impact in eliminating violence in the communities.

“Violence Interrupters do the canvassing in their (respective) communities and they interact with at-risk youth. Thus far, we have been going well. There is still room for growth, but as time progresses, I am pretty sure we will see positive results in the communities,” she says.

The PMI Western was established in 2004 in response to the upsurge of violence in some volatile communities in St. James. Its main objective is to ensure peace and stability for all who work, live and play in western Jamaica.

They achieve this by delivering a range of services and projects that promote peace.

The national PMI, which was launched in January 2002, is an initiative of the Ministry of National Security.