LOS ANGELES, Sept. 21, 2021 /PRNewswire/ — PodcastOne, a leading podcast platform and a subsidiary of LiveXLive Media (NASDAQ: LIVX), announced today that it entered into a pact with retired NBA champion and All-Star player Metta World Peace for his Mettaphorically Speaking podcast. Mettaphorically Speaking is set to launch today, September 21, International World Peace Day, on PodcastOne, Apple, Facebook, Spotify, Amazon and wherever podcasts are heard. Boost Mobile is the title sponsor of the new podcast. 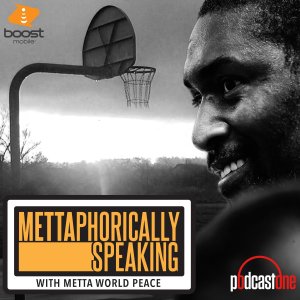 Fresh from his appearance on the hit Netflix documentary series Untold in an episode devoted to the infamous ‘Malice in the Palace’, Mettaphorically Speaking features Metta World Peace as he interviews a variety of people from the worlds of athletics, music, film, television and business covering topics including sports, business, mental health and community, with a goal of inspiring and empowering listeners to pursue their own passions and dreams. Using personal experiences as conversation starters, Metta will seek the answers about what really makes his guests tick by exploring topics outside of each guest’s public persona to discover what drives and motivates them in their daily lives. Mettaphorically Speaking infuses humor with frank discussion and offers a place where listeners can find knowledge, inspiration and power. The confirmed guest line-up includes former Indiana Pacers teammates Jermaine O’Neal and Stephen Jackson, former Los Angeles Lakers teammate Robert Horry, former NBA All-Star Baron Davis, podcast hosts Jordan Harbinger and Dr. Drew, and Entourage creator and host of Hollywood Wayz Doug Ellin.

“I’m very excited to be partnering with PodcastOne and Boost Mobile on my ‘Mettaphorically Speaking’ podcast, and look forward to bringing unique points of view on important topics that oftentimes don’t get much attention,” said Metta World Peace. “We’re thrilled about our current and upcoming guest lineup and can’t wait to share these honest, in-depth conversations with audiences far and wide.”

“Metta World Peace was a force to be reckoned with on the hardwood courts of the NBA and he’s a force to be reckoned with in the world of podcasting. His drive to search for the deeper purpose and meaning in life matches the drive that shone in his career as a professional athlete, and we couldn’t be more pleased to be hosting his podcast,” said Kit Gray, President of PodcastOne.

Mettaphorically Speaking is the latest podcast to be added to PodcastOne’s thriving roster of Sportsnet programming and Metta World Peace joins fellow all-star talent Michael Irvin, Jay Cutler, Steve Austin, Robert Horry and Jim Beaver as some of the most authoritative names in podcasting and adds to LiveXLive’s winning streak of expertly-crafted sports content. LiveXLive and PodcastOne are taking the greatest athletes in the world and bringing these revered icons directly to the fans. Since LiveXLive’s acquisition of PodcastOne, the network has added 35 new podcasts to its already existing roster of 300 unique shows.