Tessanne gets love from daytime Emmy

Police clash with protesters in Baltimore for a second night; National Guard takes up position 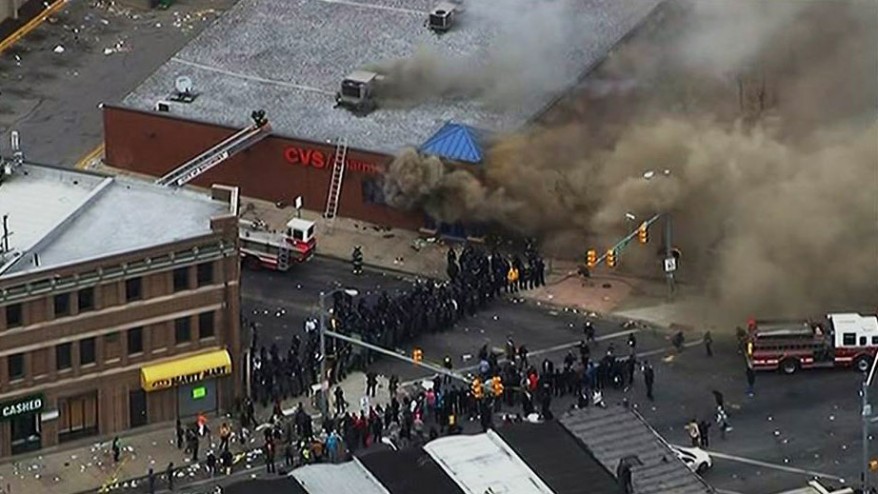 BALTIMORE _ A line of police behind riot shields hurled tear gas canisters and fired pepper balls at as many as 200 protesters Tuesday night to enforce a citywide curfew, imposed after the worst outbreak of rioting in Baltimore since 1968.

Demonstrators threw bottles at police and picked up the canisters and hurled them back at officers. But the crowd rapidly dispersed and was down to just a few dozen people within minutes.

The clash came after a day of high tension but relative peace in Baltimore, as thousands of police officers and National Guardsmen poured in to try to prevent another round of looting and arson like the one that rocked the city on Monday.

It was the first time since the assassination of the Rev. Martin Luther King Jr. in 1968 that the National Guard was called out in Baltimore to quell unrest.

The racially charged violence on Monday was set off by the case of Freddie Gray, a 25-year-old black man who died of a spinal-cord injury under mysterious circumstances while in police custody.

Monday’s outbreak of looting, arson and rock- and bottle-throwing by mostly black rioters erupted just hours after Gray’s funeral. It was the worst such violence in the U.S. since the unrest last year over the death of Michael Brown, the unarmed black 18-year-old shot by a white police officer in Ferguson, Missouri.

In a measure of how tense things were on Tuesday, Baltimore was under a 10 p.m.-to-5 a.m. curfew. All public schools were closed. And the Baltimore Orioles cancelled Tuesday night’s game at Camden Yards and _ in what may be a first in baseball’s 145-year history _ announced that Wednesday’s game will be closed to the public.

The streets were largely calm all day and into the evening, with only a few scattered arrests.

About 15 minutes after the 10 p.m. curfew took effect, police moved against protesters who remained in the street in the city’s Penn North section, near where a pharmacy was looted the day before.

Shortly before the curfew and in a different neighbourhood, police arrested three to four juveniles after people started attacking officers with rocks and bricks, authorities said. At least one officer was reported injured.

At the White House, President Barack Obama called the deaths of several black men around the country at the hands of police “a slow-rolling crisis.” But he added that there was “no excuse” for the violence in Baltimore, and said the rioters should be treated as criminals.

Political leaders and residents called the violence a tragedy for the city and lamented the damage done by the rioters to their own neighbourhoods.

“I had officers come up to me and say, ‘I was born and raised in this city. This makes me cry,”’ Baltimore Police Commissioner Anthony Batts said.

Some of the same neighbourhoods that rose up this week burned for days after the assassination of the Rev. Martin Luther King Jr. 47 years ago. At least six people died then, and some neighbourhoods still bear the scars.

Jascy Jones of Baltimore said the sight of National Guardsmen on the street gave her a “very eerie feeling.”

“It brought a tear to my eye. Seeing it doesn’t feel like the city that I love,” she said. “I am glad they’re here, but it’s hard to watch.”

The rioting started in West Baltimore on Monday afternoon and by midnight had spread to East Baltimore and neighbourhoods close to downtown and near the baseball stadium.

At least 20 officers were hurt, one person was critically injured in a fire, more than 200 adults and 34 juveniles were arrested, and nearly 150 cars were burned, police said. The governor had no immediate estimate of the damage.

The violence set off soul-searching among community leaders and others, with some suggesting the unrest was about more than race or the police department _ it was about high unemployment, high crime, poor housing, broken-down schools and lack of opportunity in Baltimore’s inner-city neighbourhoods.

The city of 622,000 is 63 per cent black. The mayor, state’s attorney, police chief and City Council president are black, as is 48 per cent of the police force.

Grey was arrested April 12 after running away at the sight of police, authorities said. He was held down, handcuffed and loaded into a police van. Leg cuffs were put on him when he became irate inside. He died a week later.

Authorities said they are still investigating how and when he suffered the spinal injury _ during the arrest or while he was in the van, where authorities say he was riding without being belted in, a violation of department policy.

Six officers have been suspended with pay in the meantime.