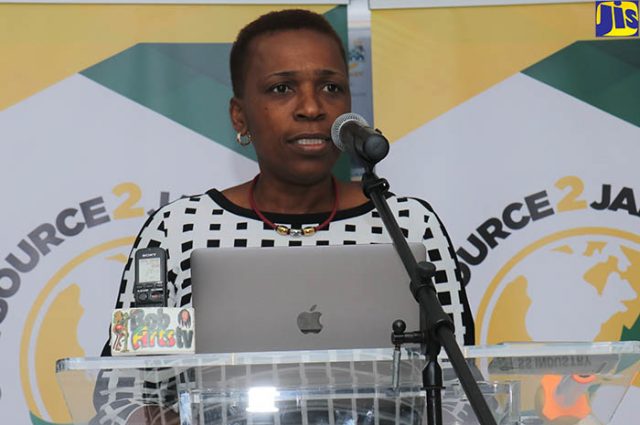 Senior Vice-President, Port Authority of Jamaica (PAJ), Elva Williams-Richards, addresses the media launch of the inaugural Outsource2Jamaica Expo & Symposium on February 8 in Freeport, Montego Bay. The event will be held from April 11 to 13 at the Montego Bay Convention Centre, St. James.

The Port Authority of Jamaica (PAJ) is expecting a major boost in employment in business process outsourcing (BPO) by year end from the provision of additional office space to meet the demands of the rapidly growing sector.

Senior Vice-President, Elva Williams-Richards, said that the Authority has just completed 63,000 square feet of modern BPO space in Montego Bay, and within the next 12 months an additional 157,000 square feet will be brought on stream in Portmore.

“These investments will bring 7,000 new jobs, increasing the PAJ’s contribution to BPO and also Knowledge Process Outsourcing (KPO) jobs from current figures of approximately 11,000 to 17,000,” she noted.

Mrs. Williams-Richards, who was speaking at the media launch of the inaugural Outsource2Jamaica Expo and Symposium in Freeport, Montego Bay on February 8, said BPO has been a “real game changer” in terms of job growth.

She informed that the Authority has invested some $11 billion in the sector over the past few years in support of the Government’s economic growth and job creation thrust.

She noted that in addition to BPO, investment has been made in upgrading the ports and other infrastructural developments to enhance Jamaica’s competitiveness in trade and other key sectors.

Mrs. Williams-Richards welcomed the Outsource2Jamaica Expo & Symposium, which will be held from April 11 to 13 at the Montego Bay Convention Centre, St. James.

The event is being organised by the Business Process Industry Association of Jamaica (BPIAJ) and will bring together global experts, technocrats, local entrepreneurs, government officials, BPO leaders, buyers and service providers.

“Jamaica has a lot to offer, and with continued focus and effort from all sectors and segments of government and strong support from the private sector, we are confident that this first-ever symposium and expo will meet the objectives of the organisers,” Mrs. Williams-Richards noted.