An Open Forum Discussion: The Rise of Gun Violence That Is Plaguing Our Youth, Our Community, Our City 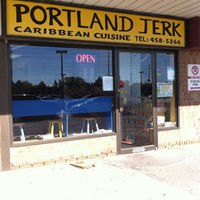 Portland Jerk Caribbean Restaurant is a long established business. Since 1998 the restaurant has endured unprecedented growth as one of the first of its kind in the city of Brampton. The owner, Gary Macintosh, pioneer Brampton community restauranteur, came to Canada in 1976 from Jamaica. He later became inspired to open his very own successful Jerk Restaurant. Desiring to give his community a taste of home, comfort foods which he grew up eating and more.

Though the menu is predominantly made up of Jamaican foods, stew chicken, curry goat, and stew beef served with your choice rice and peas, there are also other creole foods from other parts of the world. For example they do serve Roti, a flour pancake type wrap. It’s comparable to a tortilla wrap but much thinner and filled with choice meat jerk pork, or chicken. Interestingly Roti at Portland Jerk can be uniquely filled with curry chicken or goat or most unique to the restaurant, Jerk Pork, veggie side and soup of the day a popular favourite among lunchtime patrons.

The delightful flavourings of the foods at Portland Jerk. Gary’s passion and creativity in building this business is partly founded upon the signature flavours of Portland Jerk. Various picks of spices, herbs and seasoning used to flavour the food and the traditional ways in which the preparation is done to serve fresh aromatic and appetizing dishes daily.
The restaurant seems to be now a permanent fixture on the plaza at Torbram and Queen in Brampton. The very busy intersection is a location which serves industrial business community as well as the surrounding residential neighbours.

Undoubtedly, Gary has witnessed tremendous growth in the development of the area from a business as well as a residential stand point, he is witnessing growth in the Caribbean restaurant business, still enjoys a level of growth, success and flexibility due in part to the nature of business (food) and attributes his success to a number of reasons. His ability to think creatively and the innovative means by which he operates keep customers coming back.
One such reason is having a highly committed and dedicated staff who has grown with the business and takes a strong interest in the success of the restaurant. It’s not just the food which keeps the operation steadfast and running at optimal level, it’s also the relationship building success between Gary and his employees, as well as their relationship with the community as a whole. The ambiance of the restaurant is inviting, the staff is pleasant and the music is always a welcome addition to the entire experience. Good food, people and music makes for good vibration and everyone is happy. It is said that humans are creatures of habit and it appears eating at Portland Jerk is a good habit that’s why people keep coming in from near and far. Blessed with success in every way on any given day you will find a line up at any hour.