Students Urged to Become Developers of Goods and Services 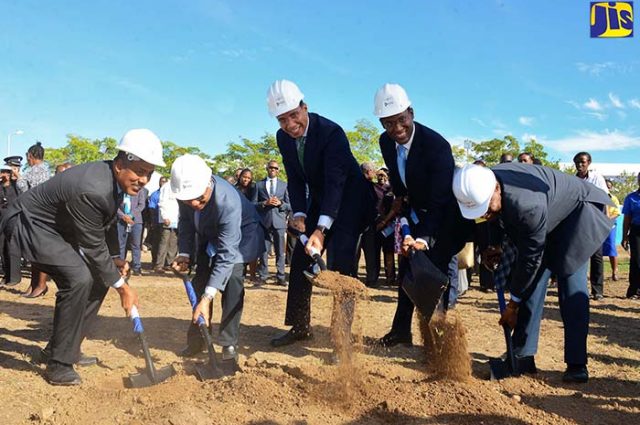 Photo: Prime Minister, the Most Hon. Andrew Holness (centre), breaks ground for the development of 150,000 sq. ft. Business Process Outsourcing (BPO) space at the Portmore Informatics Park in St. Catherine on February 16. He is joined by (from left): President and CEO of the Port Authority of Jamaica (PAJ), Professor the Hon. Gordon Shirley; Minister without Portfolio in the Ministry of Economic Growth and Job Creation, Hon. Dr. Horace Chang; PAJ Chairman, Ambassador Nigel Clarke; and Portmore Mayor, His Worship Leon Thomas. The US$23 million project is being implemented by the PAJ and will create 3,000 jobs.

Prime Minister, the Most Hon. Andrew Holness, yesterday (February 16), broke ground for the construction of a 150,000 sq. ft. Business Process Outsourcing (BPO) space at the Portmore Informatics Park, which is expected to employ 3,000 persons.

The US$23 million project, being implemented by the Port Authority of Jamaica (PAJ), is expected to be completed in one year.

Addressing the groundbreaking ceremony at the Park in Portmore, St. Catherine, Mr. Holness said the commencement of this project represents the Government’s commitment to cutting through dense bureaucracy for the fast-tracking of critical programmes.

“My job is to reach into that deep pipeline of projects and rip them out…to cut through the dense bureaucracy that sometimes become self-serving and get to this point,” he added.

The Prime Minister further said the Government remains committed to the expansion of the BPO sector as one of the faster ways to create employment.

“The aspiration and the ambition to get Jamaicans employed is a serious one and the Government must move with alacrity, determination and instrumentality to provide employment for our people,” he said.

The development of the Portmore Informatics Park forms part of a wider project being advanced by the PAJ in support of the Government’s vision to expand the outsourcing sector to realise a goal of 200,000 jobs within four years. A total of $4 billion is being spent on the development in Portmore as well as on work now underway in Montego Bay, St. James.

Chairman of the PAJ, Ambassador Nigel Clarke, said the BPO sector is being targeted as one of its strategic growth areas in order to fulfil the agency’s mandate of facilitating development that support the growth agenda of Jamaica.

He said with the BPO services sector expected to grow by over 50 per cent, the PAJ is responding to those prospects and keeping apace of rising demand.

“Today’s ceremony represents another step towards the achievement of market leadership within the sector and it provides support to the national growth agenda,” he noted.

The PAJ has pioneered work in BPO sector development since 1987, through the agency’s Montego Bay Free Zone and the Kingston Free Zone. The agency manages accounts for some 10,200 employees within the outsourcing sector of Jamaica.

Meanwhile, Minister without Portfolio in the Ministry of Economic Growth and Job Creation, Hon. Dr. Horace Chang, urged all Government agencies to collaborate in leading the charge to expand the BPO sector, which he said provides a diverse set of professional options.

He said the Government is committed to ensuring that Portmore and other similar communities can be involved in the growth of the sector and gain meaningful employment.

“Portmore is an ideal area…with a huge population of educated, capable Jamaicans looking for jobs and if we provide the opportunity and the training, they can in fact make Portmore Informatics

Park one of the finest destinations for Business Process Outsourcing,” Dr. Chang said.

Over 4,000 new jobs have been added to the sector within the last three years to increase employment for about 22,000. Revenues from the industry grew from approximately US$230 million in 2012 to US$400 million in 2015.