Prime Minister, the Most Hon. Andrew Holness, speaking at the Bilateral meeting with Jamaica and the Premier of China

Prime Minister Andrew Holness yesterday (November 9) concluded his official visit to China which started with a bilateral meeting with President Xi Jingping and an address to the opening ceremony of the China International Import Exposition in Shanghai. The Prime Minister then journeyed to Beijing where he held further bilateral talks with Premier Li Kequiang. These bilateral meetings were used to review Jamaica’s current cooperation framework with China and explore additional areas of cooperation agreed upon under a new strategic framework. 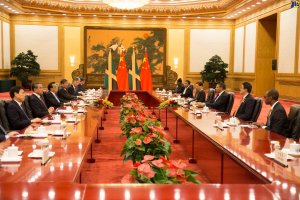 Bilateral meeting with Jamaica and the Premier of China

Under the current framework of cooperation, the North South Highway construction by China Harbour Engineering Company was highlighted along with JISCO’s purchase of the Alpart plant and mining rights as the two major Chinese investments in Jamaica. Infrastructure work completed and ongoing under loan cooperation programmes Jamaica Development Infrastructure Programme (JDIP) , Major Infrastructure Development Programme (MIDP) and the South Coast Highway Improvement Project (SCHIP) were also mentioned. Gratitude was expressed on behalf of the people of Jamaica for China’s assistance in agreeing to construct a new state of the art Western Children and Adolescent Hospital in St. James, constructing two infant schools, one in St. Andrew and the other in St. Thomas, and the new headquarters building for our Foreign Affairs Ministry in Downtown Kingston.

Under the new strategic framework, the two governments have agreed to focus efforts on increasing trade, particularly to encourage more Jamaican goods and services to be exported to the Chinese market. This process has already begun with the export of live lobster into China and we are in the process of finalizing the procedures with the Chinese authorities to allow for export of frozen lobster. An important aspect of the Prime Minister’s visit was to address the opening ceremony of the China International Import Exposition where JAMPRO and Jamaican private sector companies showcased Jamaica’s products and services. “Already we have seen great interest and increased demand for Jamaican Blue Mountain Coffee and Rums” said Prime Minister Holness during a wrap up interview.

On the investment side, Prime Minister Holness informed that cooperation on infrastructure will continue, however the Government of Jamaica in keeping with its firm commitment to reduce debt rapidly, would not negotiate any new loan programmes with our Chinese partners. He went on to say that infrastructure projects will therefore take the modalities of joint venture partnerships, public private partnerships, or private sector transactions directly between Jamaican firms and Chinese firms as the normal course of business. Under the new cooperation framework, investments will be more strategic and focused on the development of special economic zones and logistics hubs, urban centre development, water and sewerage, agriculture, and affordable housing.

Prime Minister Holness expressed the view that these areas were strategic for investments because they could be pursued on an open, profitable commercial basis, within fiscal incentives allowed by the law and without government necessarily incurring more debt or having to take an equity stake. He also noted that the areas were strategic because they aligned with the government’s objectives of stimulating growth, creating jobs, and building resilience in Jamaica’s economy. Prime Minister Holness welcomed China’s willingness to open its markets to more goods coming from Jamaica other than bauxite, and the interest in investing in the Jamaican economy.

Another area of greater cooperation under the strategic partnerships framework is education. Prime Minister Holness noted that China has always been supportive of our education system from the primary to the tertiary level. However, he also noted that the world is now in the fourth industrial revolution, and small developing countries like Jamaica must invest more heavily in equipping its citizens with 21st century skills and resources to close the digital divide and ensure that our work force qualify for the jobs of the future. Through our partnership with China, Prime Minister Holness said his government will be focusing on technology training and building out more school infrastructure to accomplish this. Prime Minister Holness was pleased to learn that later this month, Vice Minister for Education for China, Ms. Weng Tiehui, will be pay a Working Visit to Jamaica to sign an MOU in the field of Education and to exchange views on new strategies needed to prepare our societies for the future of work.

Both Jamaica and China place emphasis on sport and culture. Prime Minister Holness praised China’s expertise in various sports, including field events, and expressed Jamaica’s interest in accessing training in these areas. As Jamaica is the “Sprint Capital” of the world, Prime Minister Holness said he looks forward to having students from China benefitting from technical assistance and training opportunities at Jamaican institutions.
The Prime Minister reported that already a delegation of 138 Jamaican coaches and athletes visited China to further develop skills in their respective disciplines under the ongoing Jamaica / China Technical Assistance Sport Coaching Project which is in its second year. Jamaica is keen to expand the scope of this project and Prime Minister Holness therefore welcomed the signing of the Memorandum of Understanding in the field of Sports.

CLIMATE CHANGE AND RESILIENCE BUILDING THROUGH GREATER APPLICATION OF TECHNOLOGY.

Prime Minister Holness stated that Climate Change is the greatest challenge for mankind and an existential threat for Small Island Developing States. He further noted that Jamaica is ever mindful of the potential catastrophic consequences of climate change and weather-related events on our people and economy. He updated Premier Li on the many initiatives Jamaica has implemented, such as a ban on single use plastics, national tree planting and reforestation, increasing renewables and reducing carbon emissions in our electricity sector, thereby doing our part to preserve our environment and oceans and minimize the impacts of climate change. Prime Minister Holness also acknowledged China’s efforts to improve air quality and reduce emissions through a massive expansion in renewables and green technologies.

Inasmuch as Climate Change is the greatest threat to mankind, Prime Minister Holness observed that never before in human history has mankind possessed the knowledge and technology to effectively deal with such a threat. Prime Minister Holness pointed out that the world has the capability to adapt existing technologies and create new technologies to mitigate and build resilience to Climate Change. It was discussed that developed countries must increase their ambitions in climate actions and keep their commitments to various international climate change agreements, particularly those regarding support for vulnerable small developing economies. Prime Minister Holness hailed China as a technological leader of the world and looked forward to collaboration with China at the multilateral and bilateral levels to address the climate change challenge, with particular strategic focus on sharing technologies in water security, renewable energy, and smarter environmental management systems.

After their meeting, Prime Minister Holness and Premier Li both expressed great satisfaction with the outcome of the engagements and the Official Visit in general and both reaffirmed their commitment to a partnership of mutual respect and friendship. It was agreed that cooperation between the two sides would strategically connect opportunities with resources to achieve inclusive growth, meaningful job creation and lift our peoples out of poverty in an “open, green and clean, as well as high-standard, sustainable and people-centered” way.