Prime Minister, the Most Hon. Andrew Holness, makes a point as he addressed the House of Representatives on.

Agriculture Minister Floyd Green faced with party scandal after viral video surfaced on social media. The video shows Floyd Green at a hotel celebration toasting to a COVID-19 no-movement day comment by the gathered fraction. It is alleged that he was in attendance with other government officials (co-workers) such as Councilor Andrew Bellamy and the host, Gabrielle Hylton was Floyd Green’s advisor. Over a dozen persons seen dining and drinking in a party fashion in the released video. Everyone seem to be enjoying themselves in a unsafe manner ignoring all COVID-19 protocols; No mask nor 6 feet apart, measures stipulated by the MOH. 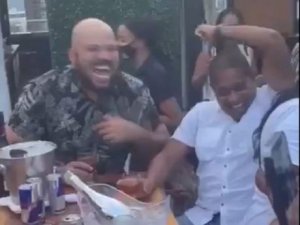 Adding insult to already a blatant disregard for the COVID-19 and curfew measures was the constant cheers of “no movement day”. The group of officials including Floyd Green continued as cheers to “Shower Labourite” followed by a room of laughers clearly exercising their affiliation to the ruling JLP.

“This morning I met with Minister Floyd Green and discussed matters relating to video circulating on social media.

At the end of the meeting, it was agreed that Minister green would not continue in the Cabinet. However, it was discussed that there may be other areas in which his expertise could be utilised,” said the Prime Minister

Source Office of the Prime Minister