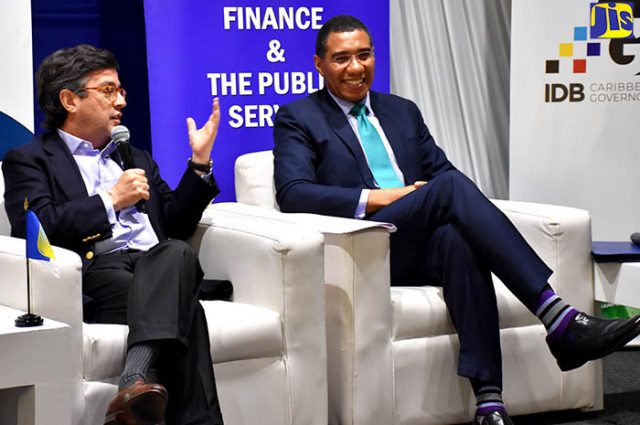 Prime Minister, the Most Hon. Andrew Holness, says the policies and programmes carried out or contemplated by the Government are in the best interest of the citizens.

Mr. Holness cites the proposed implementation of the National Identification System (NIDS) as one such project.

He was speaking at a press conference at The Jamaica Pegasus hotel, New Kingston, on Tuesday (February 27), following the conclusion of the 7th Inter-American Development Bank (IDB) Caribbean Governors’ Meeting.

Noting the issue of trust resonating with some persons about how personal data collated under NIDS will be handled, Mr. Holness gave the assurance that there will be “nothing nefarious to, in any way, erode the privacy of the citizen”.

“Many issues arise when we start to enter upon the conversation about giving every citizen an identification. It means that the Government will have to collect information about every citizen, (and) we acknowledge that many of these concerns are legitimate,” he said.

The Prime Minister said, however, that the Government is duty-bound to act responsibly, scrupulously and with integrity to ensure that the citizen’s well-being is safeguarded in whatever endeavour is carried out.

“So whether it is in national security, justice and supporting the judiciary… (providing) housing and facilitating land settlement, increasing the efficiency of the public, the speed at which we do business, (or) giving the citizen an identity, the Government is acting in the best interest of the citizen. What we are trying to do is strengthen Government so that we can better serve you,” Mr. Holness said.

The IDB conference, which was held under the theme ‘Jump Caribbean’, focused on how best the region can strategically embrace the reality of the digital revolution.

They included representatives from The Bahamas, Barbados, Guyana, Suriname, Trinidad and Tobago, and Jamaica.