Bolt Statue to be Completed for Independence Celebrations

Resource App for Young People to Roll Out Shortly 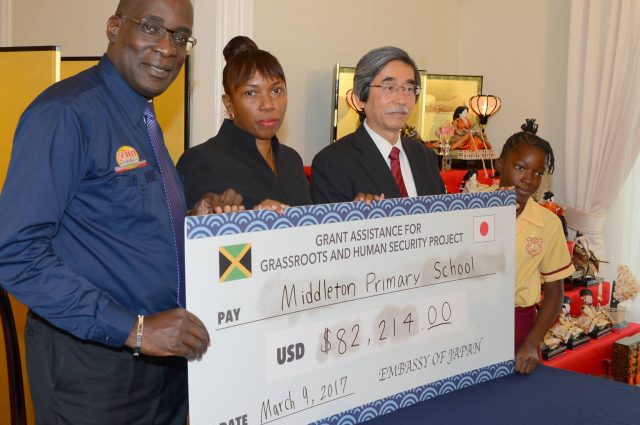 Photo: Education, Youth and Information Minister, Senator the Hon. Ruel Reid (left) and Japan’s Ambassador to Jamaica, His Excellency Masanori Nakano (2nd right), display a symbolic cheque for a $10-million (US$82,214) grant which was presented to the Principal of Middleton Primary School in St. Thomas, Jennifer Crawford (2nd left), to construct a canteen at the institution. The money has been provided under the Japanese Government’s Grant Assistance for Grassroots Human Security Projects. Sharing the moment is Middleton Primary student, Abigail Johnson.

Administrators at the Highgate Primary and Junior High School in St. Mary and Middleton Primary School, St. Thomas, have welcomed the $24-million (US$195,817) grant funding from Japan for infrastructural works at their institutions.

Highgate Primary will benefit from the construction of two new classrooms at a cost of $14 million (US$113,603) that will increase the institution’s complement to 13.

Both allocations have been provided under the Japanese Government’s Grant Assistance for Grassroots Human Security Projects Programme and were initiated through a partnership between the National Education Trust (NET), an agency of the Ministry of Education, Youth and Information, and the Embassy of Japan in Jamaica.

Agreements formalising the allocations were recently signed by Japan’s Ambassador to Jamaica, His Excellency Masanori Nakano, and the schools’ Principals – Adassa Henry of Highgate Primary, and Jennifer Crawford of Middleton Primary.

Ms. Henry, who described the grant agreement signing as a “momentous occasion”, welcomed her school’s provision.

She said the additional two classrooms will greatly assist in alleviating space constraints for the more than 700 students.

Ms. Henry said consequent on the removal of the double-shift system in 2015, the school has been improvising in order to create additional space to accommodate all the students.

She added that with the addition of the new classrooms, she is confident that some of the overcrowding will be alleviated and, very importantly, “we will have two ideal areas for improved teaching and learning”.

For her part, Ms. Crawford said the dream of building a canteen at Middleton Primary, which has approximately 100 students, “has become a reality”.

She emphasised the importance of canteens in schools’ operations, particularly in relation to student development.

“Well-organised canteens provide adequate nutrition, which gives students and staff high energy levels and prevents diseases such as obesity and anaemia, which are related to poor diet,” the Principal indicated.

Ms. Crawford said the signing of the agreement marked a great day for the school, “as the students and staff can now look forward to a (more) comfortable space that will provide nutritious meals for them, five days per week”.

“On behalf of the school’s Board of Management, staff, students and parents, it is a pleasure to express thanks to the Grassroots Humanitarian Project of the Government of Japan for approving our proposal for funding of our canteen building. This canteen will be of invaluable benefit to the school and community,” she added.

In his remarks, Ambassador Nakano said he was extremely happy to know that his country’s provisions would go a far way in assisting both schools.

“We highly value education in the (provision) of our assistance to Jamaica. Since I arrived as Ambassador of Japan, I purposefully put our focus on the education sector. It is my strong belief that education is the key to develop a nation and people,” he said.

Ambassador Nakano argued that Jamaica has the potential to further advance economic and social development as a progressive nation, “with bright young students (like those at Highgate and Middleton Primary Schools)”.

“This is why we are working with teachers and staff at your respective schools, as well as personnel from the Ministry of Education, to provide you with better (teaching and learning) environments,” he added.

For his part, Education, Youth and Information Minister, Senator the Hon. Ruel Reid, said both projects reflected the continued strong partnership between Jamaica and Japan.

He noted that both nations have enjoyed strong bilateral relations since establishing diplomatic ties in 1964.

This collaboration, the Minister pointed out, has been strengthened over the years through several initiatives, including the teacher exchange programme.

“I take this opportunity to thank the Government of Japan, through the Embassy here in Jamaica, for the continued support to our development efforts, especially in the area of education. Your partnership is contributing to tangible improvements in the lives of many of our children,” he said.

The Minister also commended NET for carrying out its mandate “to mobilise financial and quality resource investments for schools in Jamaica”.

Director for Donor and Partnership Management at NET, Latoya Harris, said the grant provisions would not only transform the schools’ infrastructures, but the institutions’ environments as well, making them safe, secure and conducive to teaching and learning.

“The bond between Japan and Jamaica is buttressed by our shared belief in the fact that human capital is vital to the development of our nation. We are, therefore, grateful and humbled that the Ambassador and his team continue to put faith in us by maintaining our partnership as we work to transform the lives of our children,” Ms. Harris said.