“Section 16:3 of the Jamaican constitution reinforce the provision of fairness and protection of litigants under the constitution and it also reinforces the Mutual Assistance Treaty that the Trafigura Scandal falls. It is incumbent on the DPP who administers this Treaty on behalf of participating states to so act.” 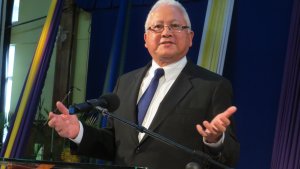 “The principle of open justice is being reinforced by the Privy Council ruling on this matter.  The Constitution guarantees this procedural fairness.”

“The Jamaican people needs to know.

If it is found that it was a political donation why was the funds sent to account CCO Association?

Secondly what is the nexus between the lifting contract was it bribery? “

Hon. Mark Golding, Opposition Leader was quick on his feet seeking a point of order he said inter alia:

“The matter is before the court and as such utterances by the member on this matter now before the court is improper. Those proceedings are incomplete. The Minister is asking certain questions which may not be raised. The Privy Council who is the final Appellate Court has ordered that the matter be heard in open court. I support that position. This pathway being taken by the Minister is rather improper.  The Privy Council has ruled that the litigants give their evidence in open court. I can understand the political motivation.”

There was an uproar in the House following this comment as the Speaker then tried to intervene seeking clarification on the Opposition Leader’s position.

There was a $31-34 million dollars based on currency conversion, said to be a donation to the PNP. This type of donation is illegal in the Netherlands. It may not be illegal in Jamaica, but a Mutual Assistance Treaty means that any such complaint by a party to this coined name called MACMA also known as the treaty, is prosecuted by the Director Of Public Prosecutions (DPP).

This is being viewed as bribery and therefore a form of corruption, due to the fact that there was an oil lifting agreement being negotiated or executed at the time of the so called donation. Since 2006 when the donation was made there has been great resistance on the part of the then PNP Government officials including PM Portia Simpson Miller et al tried to bury the matter.  The five (5) officials identified as being in breach have refused to give evidence in open court. They first claimed diplomatic immunity. Local court action having been exhausted it was then sent to the Privy Council for a ruling. This is the final Appellate Court, any ruling against them means they must now give their evidences in open court.

“The Registrar has been asked to issue summonses to the five PNP officials and give my department an early court date.  There is no need to find out from The Applicants, in the Netherlands if they wish to proceed. They have not so indicated in the past. So we will proceed.”

We hope that there will be full cooperation by all parties so this matter can now proceed to completion. It is now 15 years having started since 2006. We think this delay is unacceptable.  Justice delayed is justice denied.

Hopeton O’Connor-Dennie is a veteran journalist who has a keen interest in decency in public life. He has international exposure.