Project Team Assures that National ID System will be Secure 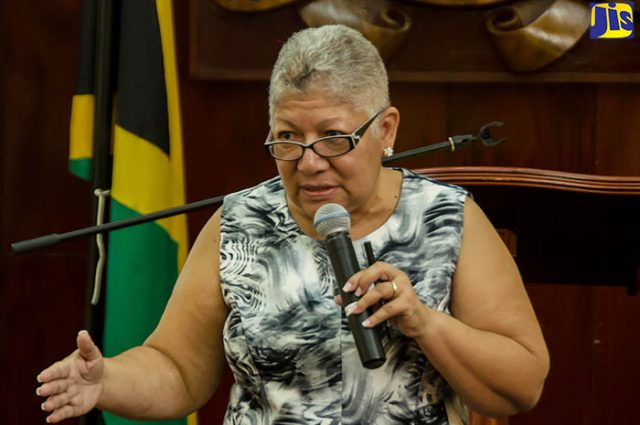 Photo: Acting Chief Technical Director, Office of the Prime Minister, Jacqueline Lynch-Stewart, addresses journalists during a press conference at Jamaica House on Wednesday (June 21) to address matters regarding the proposed National Identification System (NIDS), which is expected to provide a comprehensive and secure structure to capture and store the personal identity information for citizens.

Jamaicans are again being assured that the data that will be stored under the proposed National Id System (NIDS) will be secure.

This assurance came from members of the NIDS project team, during a press conference held at Jamaica House yesterday (June 21).

Expected to be rolled out in 2018, NIDS will provide a comprehensive and secure structure to capture and store the personal identity information for citizens.

Under the system, which will have anti-fraud features, every Jamaican will have a unique identification number.

Department Head, Data Management, e-Gov Jamaica Limited, Walt Brown, noted that infrastructure will be put in place to ensure that all access to data is managed, audited, and controlled.

He said the systems implemented will guard against internal and external breaches.

“We have recognised that the issue of data privacy is very important and we are taking all the measures necessary to ensure that the NIDS and all systems housed within e-Gov Jamaica Limited are provided with the highest level of security that will meet industry standards,” he pointed out.

“So, you can be assured that there will be no situation that can develop, that we would not have considered… and you can have the assurance that your data is not going to be out in the public domain without your permission,” he said.

Mr. Brown informed that the persons authorised to access the data will be under strict guidelines and policies that will direct how they treat with such information.

One such policy is the National Identification and Registration Bill, which, when passed, will facilitate the establishment and regulation of NIDS.

Director of Communications and Public Affairs at the Office of the Prime Minister, Robert Morgan, explained that a section of the Bill speaks to penalties of up to $4 million and four years in prison, “if you abuse the data, especially persons working within the database management organisation”.

“The punitive measures for compromising or attempting to compromise, whether it’s the ID card, whether it is access to the data from the source… , are very robust and very strong,” he said.

Mr. Morgan said the Data Protection Act to come on stream will also serve to discourage or punish persons who try to abuse the data.

NIDS Programme Director, Warren Vernon, said security will also be put in place based on international standards, to protect the Government’s data centre, where NIDS information will be stored.

He informed that this is the same data centre that has been storing tax information, driver’s licence information, and all other data facilitating doing business with the Government.

“History has shown that they have been very responsible with doing so (protecting the data). As part of the NIDS solution that we are proposing to install, those security measures will certainly be strengthened,” he said.

For her part, Acting Chief Technical Director at the Office of the Prime Minister, Jacqueline Lynch-Stewart, said that persons will not be able to browse any individual’s information stored on the database.

In addition, she noted that the police cannot access the data without a court order and external governments “cannot just go and access the information”.

In the meantime, she pointed out that NIDS will be a gateway to a digital economy for Jamaica, facilitating e-governance and e-business.

“We are not going to be able to move the economy into a digital economy without a national ID that is secured, trusted, and verifiable,” she noted.

It is expected that the NIDS will become the primary source for identity assurance, authentication and verification, in order to improve the governance and management of social, economic and security programmes.

NIDS will capture biometric data such as fingerprint, footprint, signature and/or facial photographs. Personal financial information and DNA are not required under NIDS.

Jamaican citizens and legal residents will be able to enrol for the NIDS at centres across the island on a phased basis.

The first phase of enrolment is set for September 2018, and the national roll-out will be April 2019, based on the passage of the legislation.

The roll-out and management of the NIDS will be handled by a new agency, the National Identification and Registration Authority (NIRA), which will replace the Registrar General’s Department (RGD) and will provide more enhanced services.

The project is funded jointly by the Government of Jamaica and the Inter-American Development Bank (IDB) at a cost of US$68 million, and will be used to improve and upgrade the Information and Communications Technology (ICT) systems across multiple government agencies.