Since the brutal killing of George Floyd on May 26th, protest have broke out not only in all 50 states of America but also in countries all around the world.  People are protesting the death of George Floyd, a black man killed at the hands of a white police officer.  The claims are 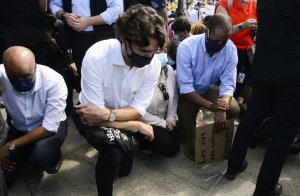 Let us take a look at some of the countries that have had large protests in the last few weeks since the death of George Floyd.

In Canada protest broke out in at least 10 cities, despite attempts from Canadian Prime Minister Justin Trudeau to smother the smoke before it caught on fire.  On June 1st, during his daily press briefings the morning after a heated weekend in the US that saw riots erupt in 50 states. Justin Trudeau did something that the American President Donald Trump still has not done.  He called out systemic racism as it is.  He took time to address the situation and said:

“As a country, we can’t pretend racism doesn’t exist here. Anti-Black racism is real. Unconscious bias is real. Systemic discrimination is real. And they happen here in Canada.”

Although Justin Trudeau spoke out against systemic racism it did not stop protestors in Canada from hitting the streets.  Protests broke out in cities such as Halifax, Moncton, Saskatchewan, Montreal, Ottawa, Toronto, Mississauga, London, Calgary and Vancouver.  All the protest were peaceful except in Montreal where protest turned violent.  Protesters clashed with police and looting and rioting ensued. Ultimately, 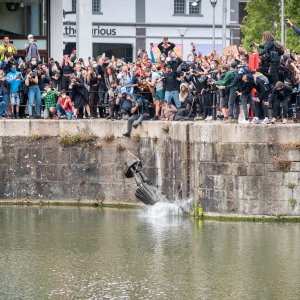 Across the pond in Europe was no different.  Governments around the world are not immune.  People are referring to this movement as the “Black Pandemic” making this a pandemic on top of a pandemic. A double whammy.  Protest broke out in Germany, France, New Zealand, Australia, Italy, Spain and the United Kingdom.  Protest got extremely heated in London where a statue of a former slave owner was toppled down and thrown into a nearby river.  That sparked a trend of finding statues of old slave owners and white supremacists, shaming them publicly and tearing them down, which caught on around the world.

Photo Credits: Feature photo from Euro News , Photo of Justin Trudeau taking a knee from The Journal , Photo of