Ministry Builds On Success Of YSEP 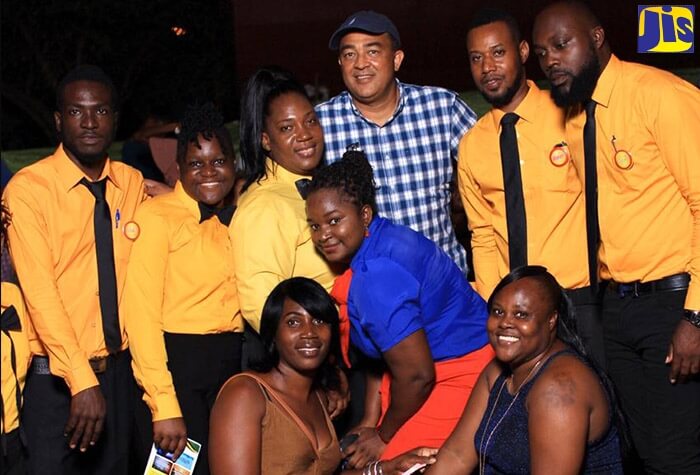 Member of Parliament for West Central St. Catherine, Dr. the Hon. Christopher Tufton (fourth left, back row), with members of the Cherry Youth Society at a special function organised by the group to honour public servants in St. Catherine, on January 1.

Twenty-one public servants in St. Catherine were recognised by the Cherry Youth Society in West Central St. Catherine, at a function held in the community’s square on New Year’s Day (January 1).

The persons were selected from the communities of Content, Dover and Cherry. They are serving in the teaching and nursing professions, the Jamaica Fire Brigade (JFB), Jamaica Constabulary Force (JCF), Jamaica Defence Force (JDF), and the Department of Correctional Services (DCS).

Children from the communities were also presented with educational items, and feted, along with other community members.

Member of Parliament for the area, Dr. the Hon. Christopher Tufton, who addressed the function, said he was impressed with the event, and pledged future support for the annual event, which is in its fourth year.

Dr. Tufton, who is also the Minister of Health and Wellness, encouraged the children to make use of the educational opportunities that are available for them, reminding them that the constituency has produced two former Prime Ministers, Mr.. Bruce Golding, and the Most Hon. Portia Simpson Miller, as well as senior civil servants.

“To all the young people here, you can be anything that you want to be, you just have to believe and be prepared to work for it,” he said.

One of the awardees, Nurse Yashema Williams, told JIS News that the recognition brought a “happy and nice” feeling, adding that the event has helped the communities to “bond together more”.

“People come together, and we help out each other more. We are getting along well,” she said.

Meanwhile, Pastor with the Sabbath Day Church of God, Gareth Johnson, a resident of Cherry, said the “coming together is amazing”.

“From here on, let us look out for each other, let us watch each other’s back. Be your brother’s keeper, because what affects your brother, it may grow to affect you tomorrow,” Pastor Johnson told the audience.

For his part, Acting President of the Cherry Youth Society, Tajay Facey, told JIS News that sponsors, WT Feeds and community elder, Lerrod Garvey, helped them to show appreciation to persons who are serving the nation, and give encouragement to children to “continue striving”.

Chairman of the National Youth Council of Jamaica, Jerome Palmer, called on community members to be determined in their efforts, so that Jamaica can realise the goals under Vision 2030.

“The best way to accomplish Vision 2030 is through your best effort,” he said.

The event was held under the theme, ‘Vision 2030…Playing my part now’.